As the holidays approach, in conjunction with Giving Tuesday, we at Apogee Journal are coming at you with a Gift Guide! To learn more about us and the work we do, see our mission here. Keep reading to learn how you can support the work we do through conscious gifting.

For your workaholic boo who “recently discovered reading.”

Gift an Apogee membership this year! Apogee is a journal of literature and art that encourages the thoughtful exploration of identity and its intersection. We feature fiction, nonfiction, poetry, and visual art. By becoming a member, you or your loved one can be a part of a community of writers, readers, and resistors and help pay contributors and promote our issues. 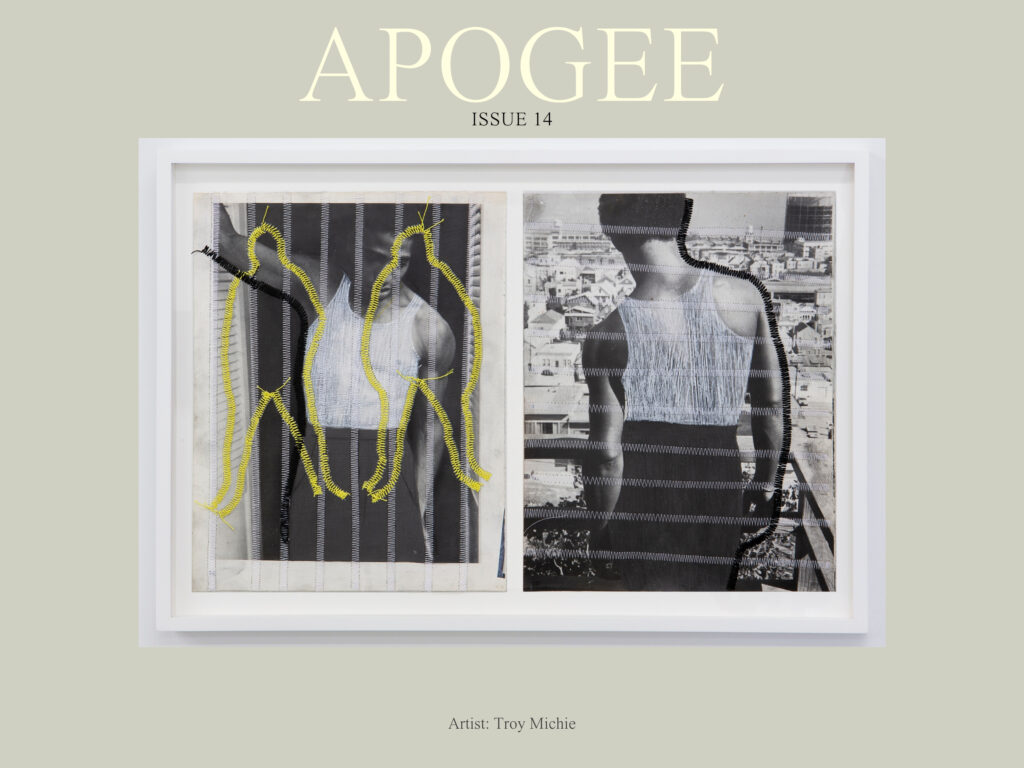 America is Woven of Many Threads, Troy Michie

Apogee manuscript consultations! Consultations with Apogee staff are either 30 and 50 minutes in length, and can be conducted at any stage of the writing process. We think they would make great gifts for:

For your writer friend who wants to find communion with other writers, anyone working on a project or planning to work on a project, or for yourself!

In May 2020, we created beautiful broadsides featuring poetry we’ve published by Kemi Alabi, Jasmine Reid, and Lisbeth White. This is part of Apogee’s goal to center and uplift Black artists. We insist on making space for a wide and urgent range of work through intentionally crafted objects. In the broadsides we see powerful arguments for joy, archival resuscitation, experimentation, and more.

We think the broadsides ($22 each) would make an excellent gift for anyone, but especially:

For your teenage sibling carving their mark in the world. 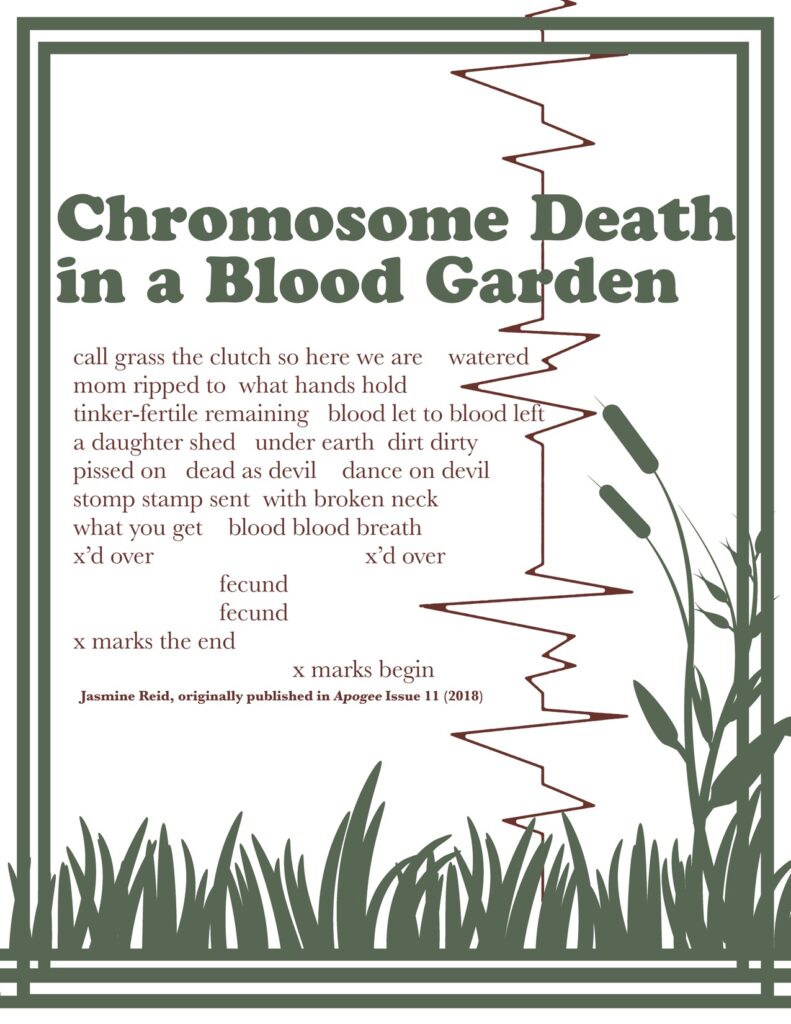 A broadside of Jasmine Reid’s poem, “chromosome death in a blood garden.”

Jasmine Reid’s short, impactful “Chromosome Death in a Blood Garden” appeared in Apogee’s inaugural online issue, Issue 11. The poem, ending with an “x” that “marks begin”,” writes with incision and tenderness alike, crafting a “blood let to blood left” that both waters and dances on the devil. This poem is a miracle.

For your father or father figure, a father you know, or someone who finds strength and joy in fatherhood. 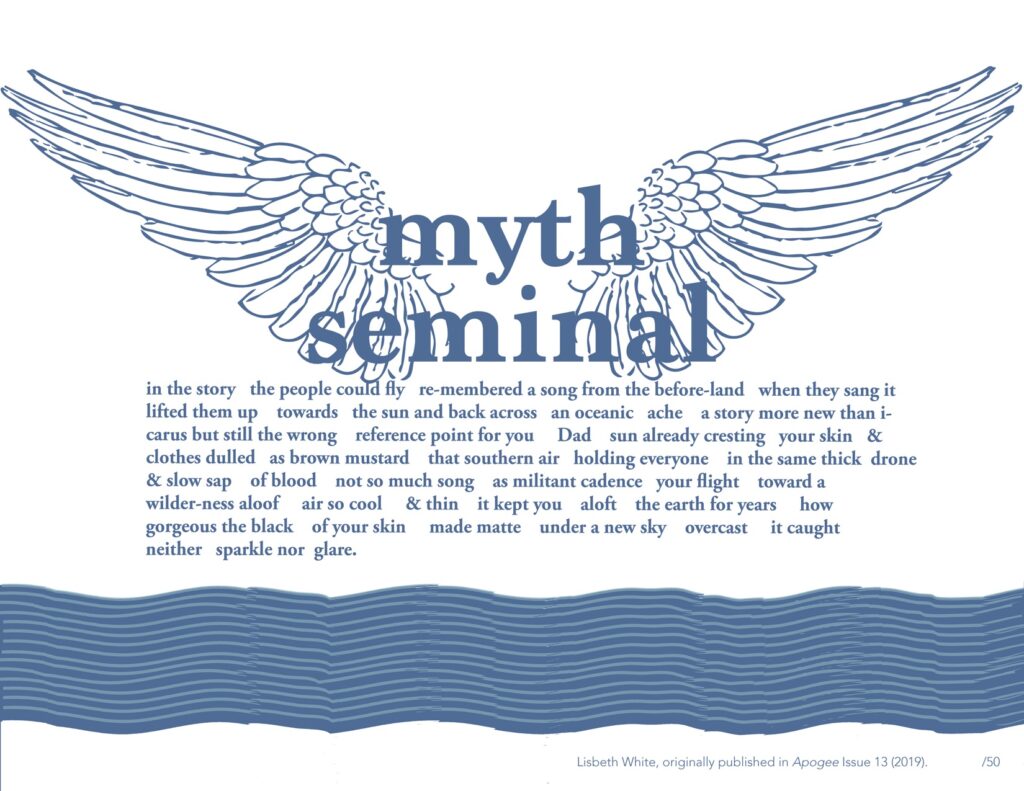 Lisbeth White’s poem, “Myth, Seminal,” appeared in Apogee Issue 13 alongside another poem of hers, “Fixed.” “Myth, Seminal” writes into and through “re-membering,” writing into flight, memory, “oceanic ache.” The poem rejects the white supremacist gaze of Greek mythology, noting that Icarus is “still the wrong reference point for you”—instead writing towards “how gorgeous the black of your skin,” making a memory that boldly, beautifully creates its own presence.

For sisters, sister-friends, your mother, grandmother, or any mothering figures in your life. 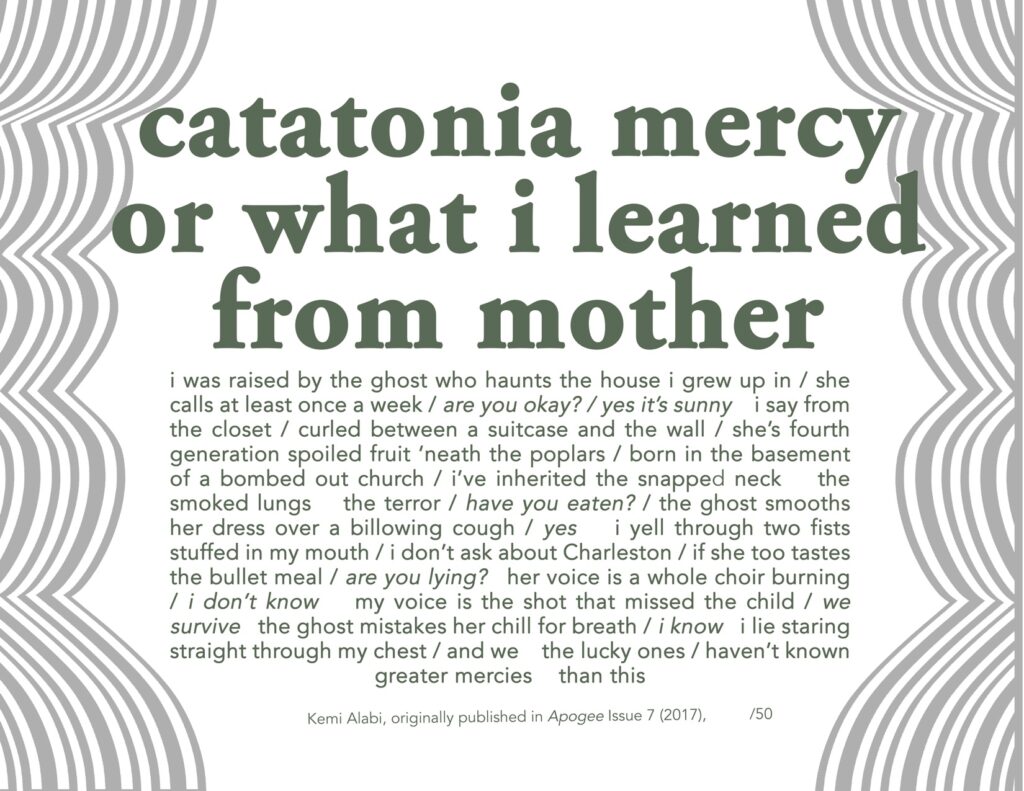 A broadside of Kemi Alabi’s poem, “Catatonia Mercy, or, what I learned from Mother.”

Kemi Alabi’s work appeared in Apogee Issue 8 alongside another poem of theirs, “Mr. Hotep Says #BlackLivesMatter and He’d Kill a Dyke.” “Catatonia Mercy,” gorgeous with memory, grief, and the necessity of survival, uses lyric language and a driven voice to write through collective trauma—encompassing, in its short prose block, both “the terror” and “greater mercies than this.”

We also have a reprisal of our much-loved tote bags ($25), printed by Black-owned The Grease Diner in Oakland for the totes, with art by E. Jane. (At the request of E. Jane, 100% of their proceeds will go to the Ali Forney Center for Homeless LGBTQ Youth.) We think they would make an excellent gift for anyone, but especially:

For your friend who has to have a minimum of 3 books on her, at least. 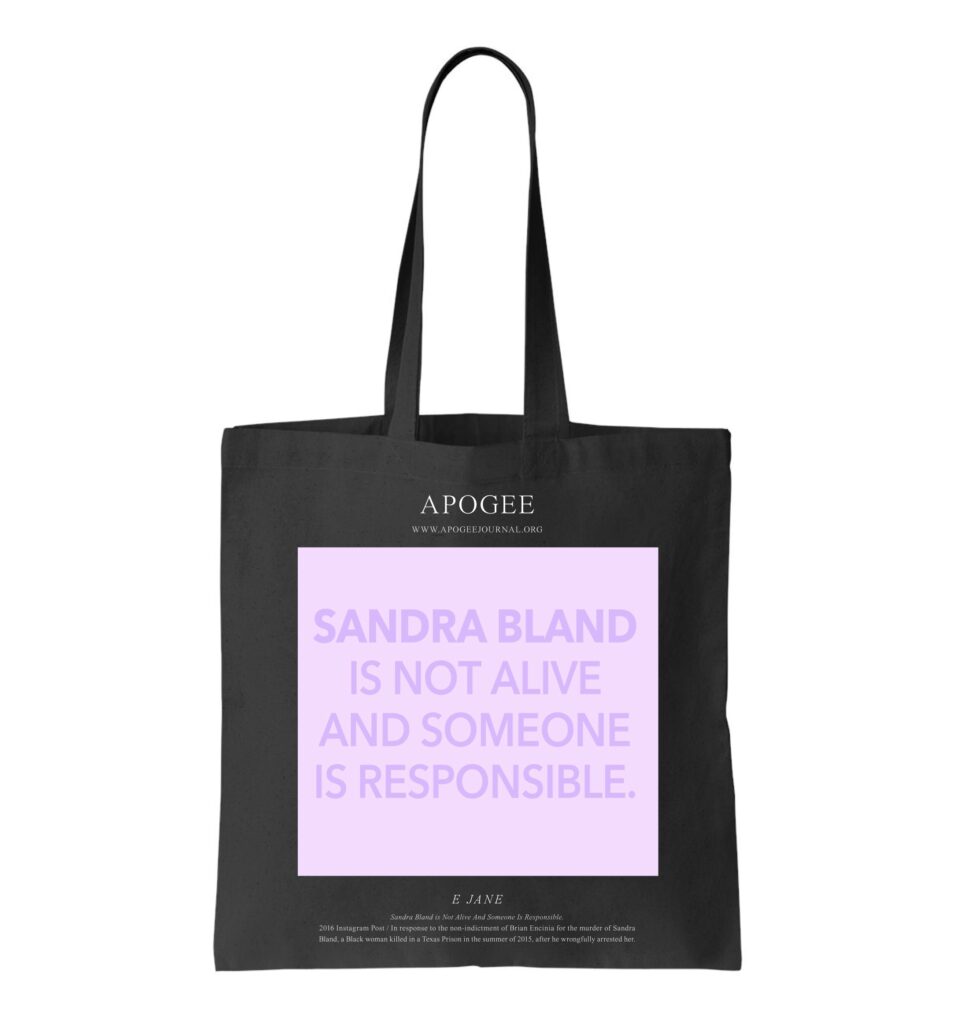 In July 2015, Sandra Bland, a Black woman, was stopped at a traffic light and racially profiled by State Trooper Brian Encina, who proceeded to wrongfully arrest her. Her arrest and detainment, as captured by the police dash cam as well as Bland’s own footage on her cell phone, showed Encina’s use of violent force in her arrest. Bland died during her detainment at 28 years old, which set forth the movement to #SayHerName, a message that continues to resonate today in light of continued violence against Black women.

E. Jane’s “Sandra Bland Is Not Alive and Someone Is Responsible” is a two-tone digital image with the titular message in the center that was originally shared as an Instagram post by artist E. Jane in 2016. The message plainly states the lack of justice surrounding Bland’s death. Indeed, who will be held accountable for Bland’s death? For the lives of so many Black women before and after her who suffer injustice at the hands of the police?

For information about this initiative and the artists, including the causes these broadsides and totes benefit and the Black-owned businesses we partnered with to create them, head over to our shop!

For a limited time, we’re also selling a bundle of all three broadsides (not including a tote bag) for 20% off! Visit our shop page.

Anya Lewis-Meeks
Anya Lewis-Meeks is a writer from Kingston, Jamaica. She completed her MFA in Fiction at Columbia University in 2019. Currently, she is a PhD student in English at Duke University, where she balances her critical interests in Caribbean Folklore and speculative fiction with her creative projects. She is working on a novel called Sisterhood. 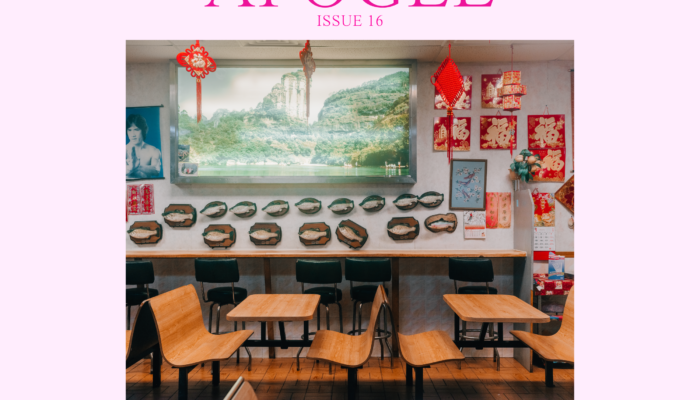 Apogee contributor Kevin Cooper will be calling in from San Quentin death row to discuss his continuing struggle for freedom and for the abolition of the death penalty.

Hoping folks will join me @EastPointPeace with @AmnestySF30 on June 29th 6pm!