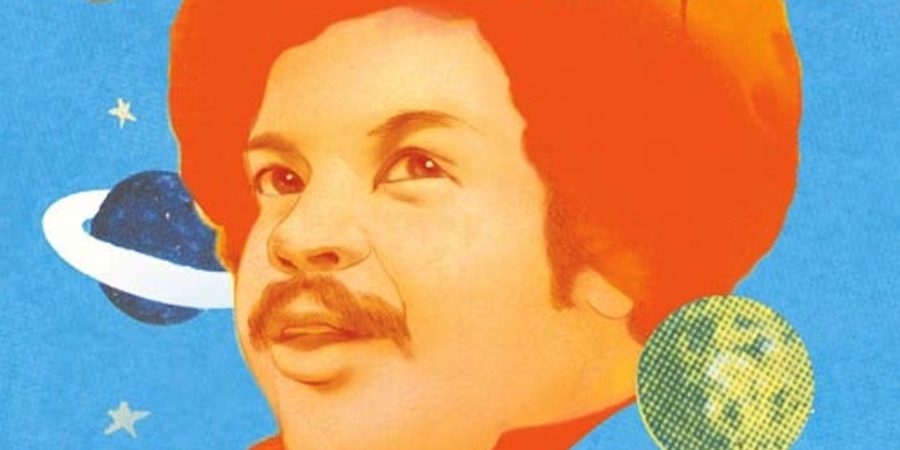 Stoned & sandaled, with the Black Power afro & bad-toothed grin, indecipherable to Everglade
bohemians
who buy their herb from him—even his given name, Sebastião, registers, only, as a nasal honk &
two soft lisps.
So they call him Tim…
Brazil, his inscrutable origin, is still just tourism & rainforest to
Americans, Black Orpheus
& Carmen Miranda’s banana headdress. No one’s sure how he got here, to Florida’s nadir,
though his
alibi is “student” & he’s been singing baritone in a doo-wop quartet. This was before The
Boatlift, before Castro emptied
his prisons on the shore; before Spanglish threaded every salt breeze & before they realized
South Beach was sinking into the sea.
Before das kapital of Latin America’s young capital was weighed in cocaine metrics—no 8-balls
yet, no kilos. & plenty
of time, still, until Tim brings Soul to Brazil, becomes a homegrown Otis Redding of the open-
air discotheque, re-
makes those early doo-wop demos with cosmic-samba beats; achieves, as it’s called in pop
music, immortality.
No—it’s September ‘63, & the immortal’s still a bum. They still don’t know what the fuck he’s
saying, these floral-
shirted collegians, every vowel turning to wet sand in his jowls, every consonant whistling
through crooked teeth,
& even when he laughs, throaty, throwing his head back, a gospel choir trying to kick out of his
chest, the joke’s as unplaceable
as his accent.
But soon—they’re not sure why—they’re laughing too, & soon he’s partying
among them, parting the beaded curtains
of some Art Deco apartment—Beat poets on the bookshelves, endless bottles of absinthe & gin.
He stays
‘til morning, scribbling broken English love lyrics on a new bohemian girlfriend’s skin. “I’ve
slept in the street,” he’ll sing, ten
years later. Tonight, however, he stays awake, holding this strange girl close, so close that the
ink rubs against him, then away.

Late autumn, sleepless again, in Dade County prison, acting the part of the hapless white-sand
romantic, singing
bossa nova through the bars, diverting, for a moment, the guard’s attention from a tin tobacco
spit-cup,
he awaits deportation. But why this sentence? The kid’s no capo, no don, no Scarface, no
Escobar.
100-odd miles from the Bay of Pigs & what goes on? An unknown soul singer gets busted
smoking blunts in a stolen car,
then, for a few nights, is locked up. A minor crime, innocuous, even; pitiful by Vice City
standards, no deed of a kingpin.

But let me print this little legend:
One year later, Brazil falls to military dictatorship;

I like to imagine
Tim never flinches under its iron fist, even as the cineastes, the poets, Caetano, Gilberto, his
brethren,
are exiled, jailed, or shot—the lucky ones slip to London, sculpting torch-songs out of fog. I like
to picture Tim,
the scoundrel, O Malandro of neverending street-songs, deported back to the corner, throwing
the shaved dice
of discontent, acting out the gnarled, sly resistance of an exile in reverse. Protected by his so-
called only vice:
“I don’t drink, I don’t smoke, I don’t snort, I don’t cheat…
but I lie.”

Up at Mary’s shrine, with loudspeakers, floodlights, & security cameras perched between angel
statuettes on the wall;
up the 88 steps that cut through flaked-paint triple deckers like a concrete vein, with full view of
bridge, beach,
& financial district, where incoming planes dip down, nearly slicing their stomachs on the
perfectly symmetrical
spikes of her crown; Latin prayers on rusted plaques, signs for Sunday mass in Spanish &
Portuguese.

Up here, purity means the plastic bottles, broken glass, & fast food bags, avalanched &
standstilled on the hill, never—unlike
the snakes she squashes—touch La Virgen’s feet. Peace means I can’t hear the blue line’s
rumble, 1A
traffic, or Todos Jueves: Noche de Rock en Español, the karaoke that sounds like crying. Up
here, a block
removed from the thoroughbred track where racehorses no longer run, the faded gold leaf of her
feet, hands, & face,
that once-opulent fleshtone, the loose-coiled clay of her robe, its aged copper gone green, the
solid brass
sphere she balances on, & the thick steel rod that holds her in place. Up here in the Heights,
between peace
& quarantine, Mary, mother of God, eyes the mainland from her vantage—from the Roman
grandeur & the trash—

lodged in the frontal lobe of my neighborhood: between the landfill it was built on & the heaven
beyond its grasp.

JD Debris
JD Debris is a poet, songwriter, recording artist, and student from East Boston, MA. His debut album, Black Market Organs, was released on Simple Truth Records on Halloween 2016, and his debut chapbook, Sparring, will be published by Salem State University Press in April 2018. Recent poems appear in Crab Orchard Review and The Acentos Review. He currently performs as a member of neo-soul artist Qwill's live band and is at work on a mystery novel, a sophomore album, and a full-length manuscript of poems. (http://www.jddebris.com)