Who Deserves to Die?: On Rationalizing Murder

Who Deserves to Die?: On Rationalizing Murder

I hear sirens and helicopters outside. Crowds of protesters march down Grand Avenue and I-580. They’re yelling, throwing bottles, and fighting. I am doing laundry.

I’m not out in the streets tonight, but I feel no loyalty to this country. Never have. It’s a common symptom of being African American. I feel nothing but a certain sense of partial belonging, comfort, and familiarity, but no allegiance.

From the onset, we have maintained and the grand jury agreed that Officer Wilson’s actions on August 9 were in accordance with the laws and regulations that govern the procedures of an officer. Law enforcement personnel must frequently make split-second and difficult decisions. Officer Wilson followed his training and followed the law. (Reilly)

Michael Brown’s mother, Lesley McSpadden said, “You’re not God. You don’t decide when you’re going to take somebody from here.” But someone, certainly, is playing God.

Walking in the middle of the street became a federal offense that night. The news says that when Officer Wilson approached the young men, he didn’t even know about the infamous cigarillo theft allegedly committed by Mr. Brown. Which begs the question: why did any of this happen in the first place? This is of course a rhetorical question.

In “Kinds of Killing” William Gass, writing from the perspective of a Nazi, asks the question: who deserves to die? And in defending the atrocious acts committed by Nazis (as well as the Iron Guard and Croatian Ustache), the unapologetic narrator presents the following argument:

Gass’s words got me thinking about what’s going on in America today. I am in no way trying to compare the killing of black men in America to the Holocaust. I wouldn’t touch that with a thirty-nine and a half foot pole. I loathe comparing struggles. But I think there is a similar mentality when it comes to rationalizing murder.

Is it ok to shoot a man dead because he’s inexplicably menacing and as dark as the night which shrouds him, like the hoodie that covers his nappy hair, because his pants sag so low you can see his boxers, because he walks with a pimp strut, because he’s thieving, loud, garish, barbarous even, talks and behaves with such a defiant bravado that grates at the very root of your nerves, because he plays that obnoxious nigger music, because he is, after all, nothing but a nigger?

I wonder, why would Officer Wilson pull Brown into the car and then shoot him? The shot that took place in the car logically seems like a defensive act rather than an offensive one. Maybe Brown did lunge in after Wilson and try to take his gun, after all. But Wilson fired 12 times. Twelve times. And 8 of those bullets lodged into Brown. They say the last shot was probably the fatal one, so maybe if Wilson had shot 10 rounds instead of 12, Michael Brown would be alive today.

The shots were from the front. Witness accounts vary as to whether and when Brown had his hands raised, and whether he was moving toward Wilson when the final shots were fired. Which brings me to the matter of how completely insane and aggressively suicidal the eighteen-year-old had to have been in order to not only a.) Try to grab a gun from a cop, but to then b). Run after said cop, whom, by the way, had already shot him once. Implausibility-wise it’s right up there with a cop pulling up to a couple of presumed street toughs and saying, come on guys.

There’s always debate, always clouds of doubt and confusion, created by the divergent accounts of the police versus certain eye-witnesses (often friends of the deceased, other black people– whom Frederick Douglass in his autobiography pointed out weren’t allowed to testify in his time. Their word didn’t count, was not, for a second even, considered). Today our word is considered too biased. We get too emotional about these sorts of things. It’s not about race, they said in the in aftermath of Trayvon Martin’s shooting. It was self defense. On Fox News they backed this argument up with statistics on how many violent crimes in U.S. are committed by black men. Do they mean that Michael, Trayvon, Oscar, and a sea of others, deserved it? In the words of Gass, “I wonder if the statisticians who were so dedicated to numbers have calculated how many commonplace outrages were committed under the cover of general criminality”.

Anything can be legitimized, even in the most blatant of circumstances. Perhaps this is why even video of the brutal Rodney King beating didn’t stop the doubts. Rodney didn’t die, but they still asked, did he deserve it? Did he deserve to be beaten within an inch of his life? He was, after all, reportedly high on PCP. The officers had no choice but to beat him up to death’s door. Several of those wearing the appropriate suits of authority said it was ok.

Ferguson Police Chief Jackson and those who’ve come before him, speak with a thinly veiled air of moral superiority. Their unquestioned outright authority wins out over the emotional cries of a community, of a mother mourning her son. Jackson and all the others coalesce into a unified force, assuring all that they have things under control, they have arrived with the explanatory facts, with procedure, and autopsies, and circumstantial evidence, and we can rest assured that their investigation of themselves will be thorough and on the level.

Many are hypnotized by his officiousness, his professionally composed and rehearsed statement, his freshly shaven pink skin and pressed uniform, decorated with an engraved silver badge, a chattering walky-talky in his chest pocket (reminding us that he is busy with the important business of protecting and serving, he has a lot on his plate). He and his cronies have become God. They get to decide when and how certain people can be taken from here. Put him up against Dorian Johnson, a distraught and unkempt young man of twenty-two with a neck tattoo and dread locks strewn across his face, his wide nose flaring as he implores us to know, like he does, that his friend did not deserve to die, that he doesn’t either. He is on trial too. Put him up against the officials, the apologists, and who do people listen to?

A small part of me—perhaps my white side, the side that grew up in the suburbs, the middle class woman who doesn’t experience harassment by law enforcement first hand; Or maybe the idealistic part that is drawn to reason and, well, justice in its purest form, the part that wants to be able to look at things impartially––wanted to believe the pink-skinned cop and the lawyer announcing what many of us already knew, that yet again the officer would not be indicted. Believing them would make things so much easier. Besides, the witnesses kept changing their stories, and then there’s the shot in the car, and all the shots were in the front, so Michael Brown must have been going after the officer, right? For a split second I wonder if the apologists have gotten to me.

But, then I remember, oh yeah, 12 shots. Twelve. Kid was unarmed. I get so angry and overwhelmed by the sheer size and weight of it all—a huge tsunami of bullshit, hate, rage, and injustice rushes toward me at full force. So I hide. I take cover in my apartment, I switch my darks from the washer to the dryer, while those who are braver than me take to the streets. They don’t know what to do either, but at least they’re doing something.

ELIZABETH WRIGHT is currently working on an MFA at Saint Mary’s College of California where she is a co-Editor for MARY: a Journal of New Writing. Elizabeth is mainly interested in humor writing, although, so far, her memoir isn’t very funny. She lives in Oakland, California with her potted plants and common-law-wed goldfish Ginger and Georgia.

Interviews
On Bangkok, Climate Change, and the Architecture of a Novel 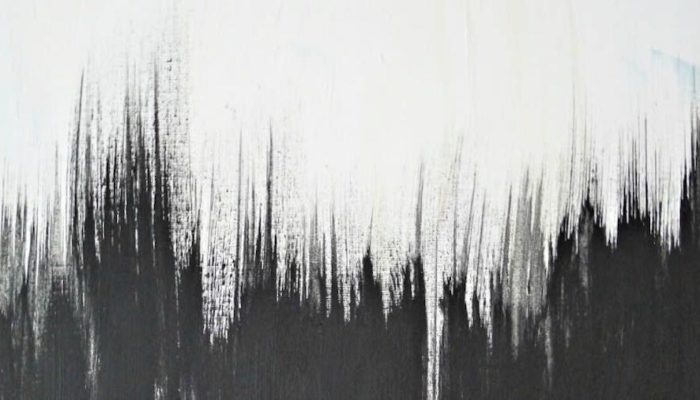