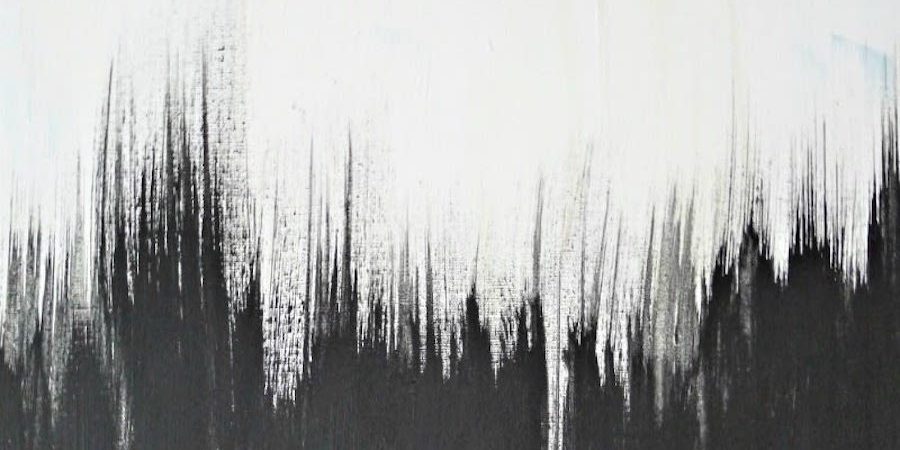 We Outlast Empire is a recurring series which aims to highlight poetry that explores the many angles of our current global and political situation. With words, we hope, we may transmute a part of ourselves—a part however small or large—that can exist without drawn borders, without violence, without injustice.

Fall from the Fig Tree

Bad boy on the back burner splitting
hairs, and cutting his nails down to the moons. Someone has been
sitting inside someone else’s body, someone is a ghost wrongly vibrating
on the same frequency as those –  Bad boy sitting underneath a fig tree, feet kicked
up with nowhere to go. Languid and lazy. Bad boy splitting
on his ex-boyfriend, rotten no good bitch who he loved with
all his heart just ten minutes ago, thinking about how the last time
they kissed, if it was the ultimate truth or a continued lie. Bad boy’s been sitting
underneath the tree watching all the figs wither. Wolves walk by him on
hind legs in a straight line and he doesn’t see a problem with that. He sees insects everywhere,
multiplying like mustard seeds – small, insidious. They buzz underneath his
cheeks, at the nape of his neck; he slaps them and they disappear,
leave him with a red mark. He could’ve been a good boy, could’ve grown
and stopped the pack a day, could’ve kept a hand away from a handle,
could’ve gotten a hold of himself instead of just a firm grip and slide; bad boy ruminates
like a cow, gestates thoughts with slow burn, this split
makes him slow to understand, quick to react. The definition of bad fruit
is a father who was a bad apple first. It’s all genetic. Bad boy hates poetry
and the way he keeps on turning out bad in it, looks up at the trees and looks down
at his broken nails, sees that behind a transparent border is
a mile-long parade of women stretching out
in front of him heading toward the sea and asks why he couldn’t be soft
like a girl, asks why the figs keep dropping and why he can’t stop
nature from turning ripe
into overripe, from turning bad
boys into dead ones.

Eda Tse
Eda Tse is a writer from Brooklyn, NY. She currently studies biology at a small college in Pennsylvania. She has previously been published in Winter Tangerine Review and Maps for Teeth, and was nominated for a Best of the Net award. According to her last.fm, she listens to music the most during the hours of 4 to 5 PM.