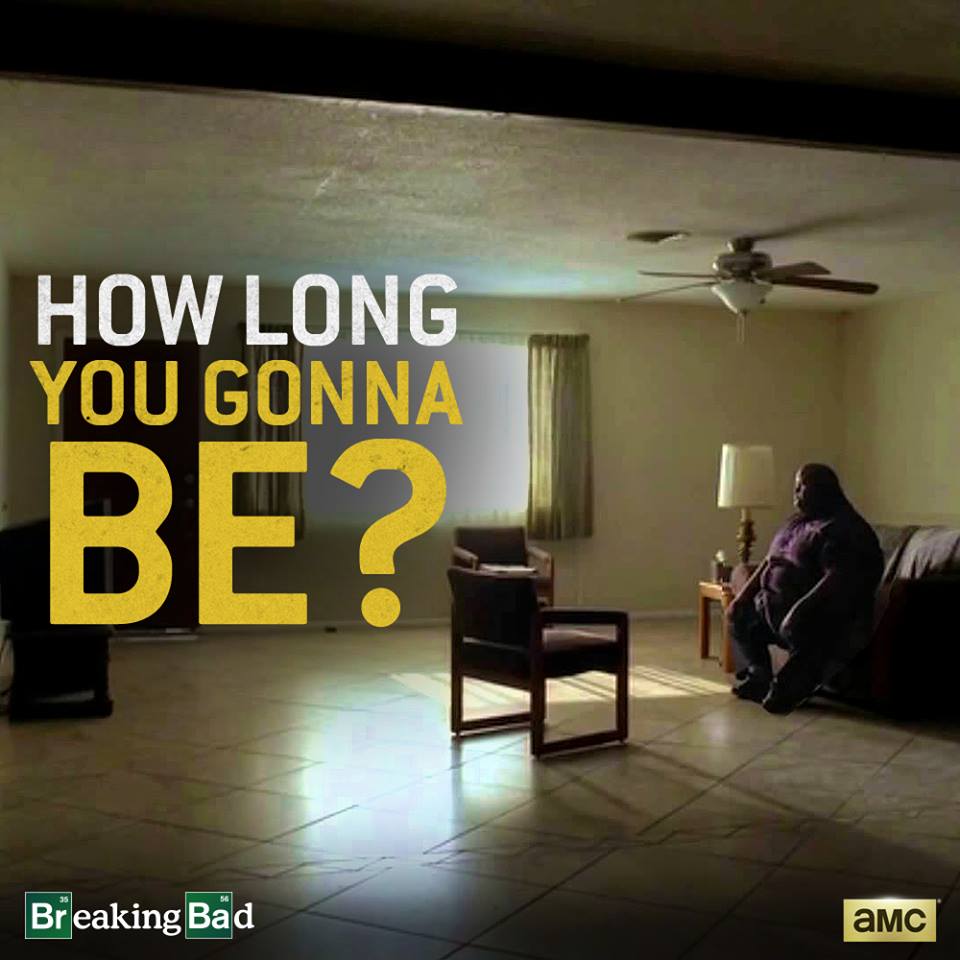 by Chris Prioleau, Co-Editor in Chief

During its run, Breaking Bad was one of the best shows on television. It was as intense and scintillating as anything ever broadcast; the direction and cinematography were sharp, intelligent, and engaging; and the acting was very often phenomenal. It was–and I mean this in both the literal and dudebro sense–an awesome show. However, I can’t join the recent chorus of voices heralding it as one of the greatest television shows of all time. I ultimately forgive the show’s structural flaws, of which there are quite a few. Less forgivable is the racism ingrained in its very premise; racism that, all too often, casually spills over into the way the show depicts its white and nonwhite characters and ultimately undermines its richness.

Malcolm Harris wrote a great article at The New Inquiry, fantastically titled “Walter White Supremacy” (which, in six months, will be the name of someone’s hipster skinhead band), about race, marketing, and the show’s obsession with the idea of purity. He very accurately cites BB as an example of the “mighty whitey” cliche, an all-too-often-seen trope in pop culture, which dictates that any above average white man can easily waltz into an exotic slumworld and almost instantaneously conquer and colonize it in the name of white superiority. In the meth trade of BB, the winners are those who can best combine science, discipline, and reprehensible savagery, all of which Walter White excels at by and far.

It’s true that this trope is absolutely nothing new, and throughout the show’s run there’d been a part of me that wanted to forgive BB for its somewhat offensive conceit. After all, it didn’t invent the myth that white people are naturally amazing at everything. There are other notable shows that stamp white faces on issues traditionally seen as urban. What would I have to gain by boycotting a show that I actually found engaging? And so, as we’re often made to do, I silenced the part of myself that said no, this isn’t right and listened to the part saying come on, we’re all having fun. Don’t play that old card again.

I could have left it at that–I was more than willing to–had that supremacist attitude merely stayed in the premise of the show. Unfortunately, it all too frequently made its way onto the screen in the form of the show’s generally demeaning attitude towards its minority characters.

Here’s a recent example: In the fourth-to-last episode of the series, Hank, Walt’s DEA agent brother-in-law, comes up with a plan to discover the location of Walt’s money by tricking Huell, the burly black bodyguard, into revealing it to him. At this point Huell had been shown as tough, intimidating, and silent as a boulder for multiple seasons. And yet with a camera phone, a cow’s brain, and some very obvious lies, Hank is able to reduce Huell to a crying mess in a matter of seconds. It was not only a sloppy moment writing-wise, a scene that only served to totter the story forward, but it went against everything the audience thought they knew about the character. In an instant he’s morphed from the stereotypically intimidating-yet-loyal black muscle to a stupid, weeping, baby man.

Huell’s somewhat pathetic fate isn’t an isolated incident, but part of a disturbing pattern concerning the treatment of BB’s minority characters. The people that populate Breaking Bad’s drug trade are nearly entirely ruthless, vicious, angry Latinos. These men supposedly have years of experience in drugs, chemistry, murder, etc., yet the show never hesitates to depict them as buffoons when faced with the great Walter White.

My problem isn’t that Walter always wins per se (the show obviously would have been very different had Tuco killed Walt and Jesse at the end of season one), it’s that the minority characters seldom feel like real people with real lives. Even the series’s most memorable antagonist–Giancarlo Esposito’s Gus Fring, Walt’s intellectual equal–feels (despite a lengthy back story and a discernible emotional life) more like a cartoon super villain than an actual human being. Admittedly, Gus is the high water mark when it comes to BB’s depictions of non-white characters, but too frequently the show employs a ‘they’re stereotypes, then they’re fools, then they’re dead’ model.

Examine this: The body count on BB is extremely high and nearly exclusively Latino. Crazy 8, Tuco, The Twins (who spent several episodes stalking across the border with their silent, mysterious otherness only to be dispatched of in “One Minute”), it doesn’t matter how violent or unstable they are (and they’re always violent and unstable), they’re never a match for Walt and company. Furthermore, their individual deaths hardly register. And while brown blood flows, as free and unlamented as tap water, any time a white character is killed it signals a moral turning point in the show, a sign that things may have gone too far. Jane, Gale, Mike, Drew Sharp–these deaths are shown to have moral weight, whereas most every brown life taken is seen as inevitable. The message here is that while dying in the drug trade is to minorities basically akin to dying of natural causes, white people shouldn’t suffer this way. Even the death of Steve Gomez, Hank’s often-emasculated loyal-hangdog Latino partner, is treated as a piece of decoration tacked onto Hank’s subsequent demise. Like in many of the old westerns the show can trace its lineage to, brown people on Breaking Bad are mostly there to be outsmarted, manipulated, and ultimately killed. 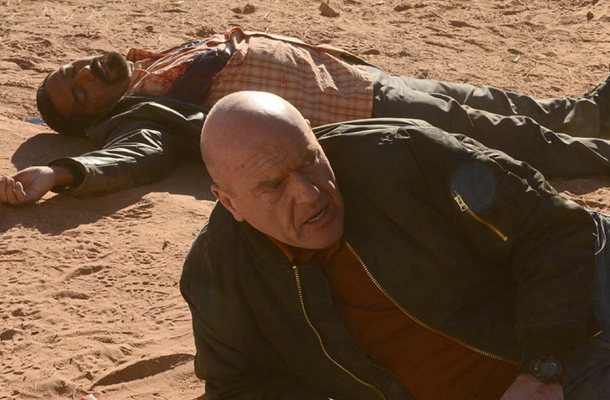 As a thought exercise, think of what it might have done to the show had the writers confirmed that Gus’ old dead business partner was actually his lover. Think of the hypothetical scene where Walt is made to acknowledge that fact, and to measure Gus’ loss against the potential loss of his own family. In this way Gus could have served not just as an adversary to Walt, but as a cautionary tale. More importantly, the audience could have been made to feel that both sets of lives were on equal footing, that regardless of skin color or assumed level of innocence, death is a tragedy. This could have also gone a long way in humanizing Gus. And I mean humanizing, not in the sense that we feel empathy or sympathy towards him, but humanizing in the sense that he feels like an actual human being. Though Gus was–both in terms of prowess and characterization–one of the strongest characters on the show, and undeniably the strongest minority character, he was susceptible to the same trap of every other brown character in BB: he frequently didn’t feel like a real person. He fluctuated between “cool, distant businessman” and “sadistic, wild murderer” like a character from a cheap spy novel.

Still, I feel that I might not take such issue with most of this had Breaking Bad done something that it never so much as attempted to do in its five year run. What I find ultimately the most offensive about the show’s handling of race was that they never once talked about it. They never acknowledged that they were occupying a problematic racial space, and instead treated the whole thing as natural. Contrast with the two shows that BB is said to compete with for the mantle of best show ever, The Wire and The Sopranos. All three shows take place in a multi-racial realm of crime and drugs but have white principal protagonists. The difference between these other dramas and Breaking Bad is that they both acknowledge the specific racial makeup of their settings and integrate it into their narrative.

Race, class, privilege, and opportunity are a huge part of the world of The Wire, and every character is shown to suffer under a system that favors some and does not favor others. While The Sopranos, lacking heavily in minority cast members, somewhat rectifies that by showing how race impacts the family’s insular world. Both Soprano kids date out of their race (to the family’s chagrin), Tony has non-white “business associates”, and once struggles with his decision to get a black cop fired. Each of the minority characters in these plotlines are depicted as having thoughts, opinions, and inner lives just as valid as their white counterparts. Even more impressively, The Sopranos didn’t shy from showing its principal protagonist to be a total bigot and inviting the audience to judge him as such. The partial result of this is that both The Wire and The Sopranos feel richly populated, complex, and realistic. Though they are obviously works of fiction, we feel their settings are real places populated with real people. The Baltimore on The Wire feels like Baltimore. We trust that The Sopranos’ Jersey resembles a real New Jersey.

Meanwhile in Breaking Bad’s New Mexico, we’re hard-pressed to find a single person without their fucking jacket on in the middle of the goddamn desert much less a richly drawn minority character. Because of this the show’s always going to feel too thin for me, too much like a trivial fantasy with no bearing on the real world.

This is a shame because with its premise Breaking Bad had the potential to realistically portray an oft-overlooked section of America. According to the most recent census data New Mexico is 47% Latino, the largest ethnic group in the state. A large, distinct part of that population are the Nuevomexicanos, the descendents of Spanish and Mexican colonists who settled in that area starting in the 16th century. Many of them consider themselves not Hispanic but Spanish-American and speak their own dialect, New Mexican Spanish, which has its origins in colonial-era Spanish. Additionally there is a huge, legitimate drug problem in New Mexico. The center of disease control reports that teens in the state use illegal drugs at higher rates than teens in many “recognized crime capitals” like Chicago, Baltimore, and Detroit. New Mexico is a real place deserving of a real story.

If Breaking Bad had been guided in any way to accurately depict its setting, and not just use it as backdrop, we could have been presented a richer, more captivating experience. As it stands what we have is another piece of white-driven fantasy.