There exists a myth, prominent in the literary world, of an objective standard for literary excellence; one whose criteria has nothing to do with a writer’s or reader’s identity or background. A glance at the submissions policy of a range of literary journals and magazines reveals many who take pride in “reading blind.” The assumption of this practice: by disregarding a writer’s name and bio when considering her work for submission, we create a fair basis from which to judge work–we eliminate bias in the reading process, we judge only by literary excellence.

However, artistic and literary aesthetics are not an algorithm, and “literary excellence” is not an infallible mathematics. In fact, this standard is based on a preponderance of white, cis-male, heteronormative writing that has been and still is central to the literary mainstream.

Recently, our poetry editor, Joey De Jesus, publicly criticized Rattle Magazine for its failure to regularly publish black and brown writers. This critique was consistent with Apogee’s mission to challenge the status quo in mainstream publishing. In response to Joey’s valid and warranted question (Rattle recently published an NYC poets issue in which all seventeen of the selected poets were white), the editor publicly dismissed Joey’s questions and insulted his work, calling it “overwrought”–language which many perceived as racially charged. This incident revealed disregard for writers of color and their concerns.

The ensuing conversation was one in which the “objective standard” was at issue–the editor believed he was simply publishing the best work in their submissions pile. This assumption attempts to strip the author of identity without considering the editor’s own identity in his editorial role. A blind reading is impossible when the reader has his own charged interpretation of the words on the page. This editor, and many others, work from the assumption that they have the authority on literary goodness without first considering the origins of their own preferences.

While Rattle later released a statement apologizing for the exchange, and expressing a commitment to re-examining its submissions policies and editorial guidelines, the incident raised questions about the logic of “blind submissions,” as the magazine’s NYC issue seemed to prove that, far from limiting bias, the policy maintained an unrepresentative status quo.

Historically and today, white male writers have been granted cultural access to publication and voice (both as writers and gatekeepers), and with it have been allowed to write the histories, perceptions, and voices of women and people of color. And, in both roles, they have time and again misrepresented POCs. Even allies with the best intentions should recognize that they are not doing anyone favors by speaking in the place of someone who is perfectly capable of speaking for themselves.

It’s also important to consider that literature doesn’t exist in a vacuum. It’s a cultural product and a part of a greater artistic and social conversation. An audience doesn’t read “blind” or “for merit,” they take authorial identity into consideration. Trying to strip a piece of literature from the  identity of the person who wrote it is pretending that it exists outside of the culture in which it was created.

Kazim Ali, a poet we published in Issue 05, phrased the problem this way: “Claiming to judge work solely based on literary merit is inherently and inescapably racist. There is…a lot of work to do in terms of taking a good long hard and critical look at the structures by which we privilege literary work and promote and develop new writers.”

How are literary standards determined? Through literature class syllabi, which disproportionately feature white male authors, ranging from middle school to graduate writing programs. Through well-read publications whose pages consistently show disparity in publishing women and writers of color. See the research of VIDA and Roxane Gay for proof.

In the past, Apogee has invited writers to comment on this problem through our Alternate Canon blog series (featuring writers Anelise Chin and Rachel Eliza Griffiths). By reading diversely, we come to see that it is not only content that is affected by perspective and identity, but voice, perspective, tone, diction, syntax, mood, and rhythm.

Blind submissions don’t actually protect writers from the existing prejudices of editors, and they alone do not contribute to editors reading inclusively.

There are valid reasons for doing blind submissions. Our friends at The James Franco Review are all about blind submissions in order to stop the cult of celebrity. The Atlas Review takes blind submissions, yet they remain committed to diversity in staffing and in solicitation. The gatekeeper’s role should not be understated here. To some extent their choices will always be subjective, favoring one over the other (and, usually, the known over the unknown), but creating a diverse staff to variegate the voices that appear in print often helps.

We polled some literary journals that have proved themselves to be committed to publishing diverse voices, either explicitly through their mission, or implicitly through the work they’ve put out, about whether they read submissions “blind.” Responses were along the lines of: “No, because we focus on publishing work by a very specific group,” and “No, because our journal’s mission promises that over half of our contributors are from underrepresented groups.” This signals to us that, at least at the present moment, maintaining a commitment to publishing marginalized voices means making some deliberate efforts.

Publications must reconsider the practices designed to create fairness and non-bias, and investigate those biases central to the judgment of “literary merit.” One strategy is to enshrine conscientious reading into your editorial guidelines. Apogee’s guidelines stipulate that accepted work should portray marginalized protagonists and characters in multi-dimensional ways; challenge mainstream stereotypes; and engage with and interrogate the status quo in the literary mainstream, and in society more broadly, either in content or through form.

Questions of position and personal experience are those which our editors take very seriously–not just in consideration of first person, nonfictional accounts, but also in our reading of poetry and fiction. But our work is not insular; it happens in conversation with the writers who entrust their work to us, and with the other literary publications and organizations doing good, hard work to keep this profession breathing. We do this for all of us. 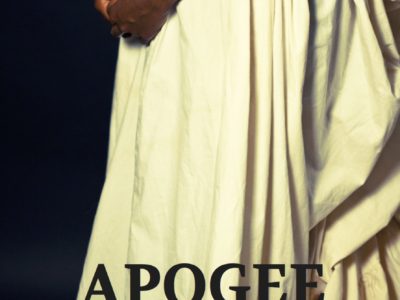 Our friends at Book Culture interviewed Apogee staff about Issue 3.  Read the full interview on their blog and join us at Book Culture on October 17th for our Open Mic Night.  Can you... Read More
Reading James McBride’s The Good Lord Bird brought me the kind of joy that makes me question the decentness of my pleasure. You know what I mean if you’ve watched... Read More
By Scott Dievendorf, Fiction Editor It’s a familiar narrative—our protagonist plunges into the depths of hell, witnesses a world unparalleled to that on earth (horrifying, challenging, against common virtue), undergoes... Read More
by Chris Prioleau, Co-Editor in Chief During its run, Breaking Bad was one of the best shows on television. It was as intense and scintillating as anything ever broadcast; the... Read More