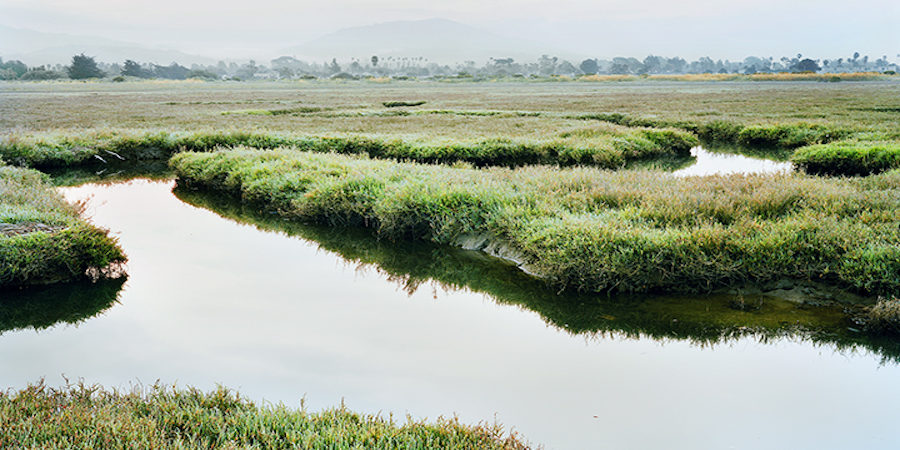 Crossing the salt marsh, flies laying their eggs
in the belly of a gutted seal, its head yards away,
its massive blue tongue jutting out, speechless,
as though taunting its corpse, studying the slow
decay, the living making the dead useful again,
you press your palm against my back, your pulse
jolting through me, through my heart, so hard,
like waves refusing to haul away the body, to give
the beast a burial, proper or improper, I can’t tell
if it’s mine or yours, if what remains taunts itself
or us, teenagers cursed with being teenagers,
secrets we can’t tell in fear of being sent back,
of there being no back to be sent to. I face you,
your face ambered by volcanic sunbeams, your lips
pinched to the right, hooked by a thin silk thread,
or because in the rush to assemble the rest of you,
your hands pushing me into the hot sand, your god
forgot to imagine your entire smile, the bright music
that escapes from it like a boy sneaking over the border
with his mother under a sky shot with stars, a detail
we must now live without. Because of you, I wonder
what else we must live without, what else our gods,
in their towering kingdoms, elegant and vicious,
deliberate and absent-minded, forgot in our making?
What else did they leave to chance or circumstance?
Because of you, the closest I’d ever come to beauty,
the closest I’d ever come to confession, to appealing
for a spot in Heaven, where we can both be citizens
and not refugees running from the law, from la migra,
from all I’m too much of a coward to admit, I gulp
every what if hammering its steel nail into my throat
like larva bursting from my stomach, demanding
blood and wings, afraid of the shame I know telling
will cause me, the shame that blooms like maggots
under my skin because I know you can never love me
that way, because I know that, despite the borders
we surmounted, there’s a border we can’t, a border
taller and wider and more dangerous than the border
we finally approach, patrolled and man-made, snaking
into an ocean that, like the countries we left, the future
I made hopeless with my silence, will never claim us.