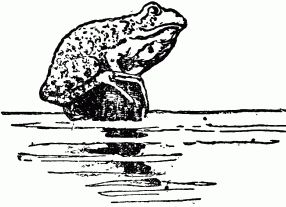 He usually writes about his routine
rising before 5:00 to weak coffee
scrubbing floors, painting walls
his one hour in the exercise yard,
or a dream from the night before
a fishing trip with his father long dead.

Today he writes about the bullfrog
in the alley behind his cell,
it has survived winter,
has emerged from a weep hole
in a retaining wall, so large now
it may not fit into the hole for long.

He reports that management
cut down a rose bush
that has graced the yard for years.
Take heart, he writes, they cut
only the stems, didn’t know enough
to dig out the roots.

It is usually his regret that stays
with me long after the letter,
but today it is the frog embodied
in the small rock that I excise
from my garden, a damp bulk
that I lift toward the sun.

I give the rock legs, long and lithe
ready to leap out and over—over,
up toward the warm light,
Instead it resists, draws inward
hardens into an acceptance
of the dark safekeeping.

GLORIA NIXON-JOHN has published essays, fiction, and poetry in both small, mainstream, and on-line presses. Most recently her poems have appeared in Clover, a publication of the Independent Writers’ Studio in Bellingham Washington. Gloria has also published pedagogical chapters and articles for teachers in many books and journals. Her essay in To Build a Fire (about her work with the InsideOut Literary Arts Project in Detroit) will appear in Aug., 2015. Listen for her upcoming podcast on The Beginning of the End (WDET). Her novel, The Killing Jar, based on the story of one of the youngest Americans to serve on death row was published in 2012. Her Memoir, Learning From Lady Chatterley was published in 2015.  Gloria lives in Oxford Michigan with her horses, dogs, cats, and husband, Michael.