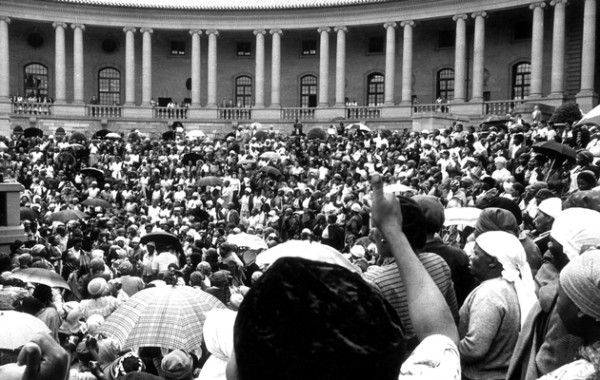 The Balikbayan Box, a study in 4 sketches by Gwynn Gacosta

The Balikbayan Box, a study in 4 sketches

Balikbayan Box, circa April 1979 (or was it 1980?), and my mother and grandma are arranging clothing, Spam, cans of Dinty Moore beef stew, and candies into an 18x18x24 inch box for our trip.  Grandma has been collecting and saving old soap nubbins for months, perhaps years, so that she can distribute them among the farmers working the land that belongs to our family.  There are two one-gallon Ziploc bags of what were at one time smooth, fragrant bars of Camay, Dove, Dial, and Ivory, each down to an eighth of an inch thick, way past their usefulness or satisfaction.  Mom and Grandma are at a standoff.  It’s either the nubbins or the nice bags of Snickers that Mom has just bought at Kmart.  (Neither of them mentions the 2 unopened 6-packs of Irish Spring soap that will also go in the box.  I decide not to bring that up.)  In a decisive move, Mom tosses out the nubbins, completely in the face of my angry, stubborn grandmother, and the blur of irate Tagalog is like a vortex swallowing up the living room and all of its name-brand contents.

“You don’t care about the poor!!” Grandma shouts.

“Not even the poor would want that trash!!” Mom yells back.  The Snickers win. Grandma doesn’t talk to Mom for the rest of the week.

Balikbayan Box, circa December 1990, and we are outside the Manila International Airport, engulfed in a sea of other travelers and their families.  The assault on our senses is immediate: the sticky heat, the smell of familiar food mixed with the acrid stench of garbage on the street; the colorful jeepneys and motorcycles zigzagging around each other with no regard for the lines on the road; Tagalog, Ilocano, Visayan, and other languages spoken rapidly and unceasingly.  My mom is standing on a curb, watching our cousins park the van that will take us on a two-hour journey to my father’s hometown.  Her cheeks are flushed and she is impatient.  Beside her are four large boxes, two for her family and two for Dad’s.  The only thing that distinguishes our Balikbayan boxes from the hundreds of others that line the curb is the sound of my mother’s sharp commanding voice rising next to them.  Everyone is flurrying to please her and she knows it.

Once at my uncle’s house the distribution of goods is underway – perfume to this auntie, a case of corned beef to that uncle.  My cousin Myra thanks my mother, humbly, for the t-shirts set aside for her.  After I’m there a while, she gets more comfortable.

“I like your shirt,” she says to me after we’d been talking for an hour about our favorite music.  It’s my beloved white shirt, the one with the portrait collar that I am wearing with black leggings and my black ballet flats.

“Thanks,” I say.  I shift uncomfortably.

“It’s my favorite shirt,” I protest, remembering the flicker of retail joy I got from finding the last one in my size on the sales rack.  I wonder now why the hell I decided to bring it in the first place.

Taken aback and too ashamed to say no, I go upstairs to take it off.

Balikbayan Box, circa June 2003, and it’s my mother’s last trip to the Philippines, after she is diagnosed with heart disease.  Grandma has just died; there is a funeral and celebrations to plan.  My mother’s doctors tell her not to travel in her condition, but she won’t listen.  She’s gone for two agonizing months, leaving me with nightmares of her dying there.

She’s in a hospital bed within an hour of her arrival from the airport.  She looks awful.  I ask her about her trip.  “I’m done with them,” she says.  “All they know is take, take, take.”  Mom left the States with a box of goods and her suitcase, and returned to us with almost nothing – her cousins and friends have taken her clothes, her makeup and her jewelry.  Just helped themselves.  “But you’re rich,” they told her, justifying the pillage.  Mom says now that her mother is gone, the only person left in her hometown to worry about is her sister.  “They’re never satisfied,” she says bitterly, “so that’s it.”  My mother can be generous to a fault, it’s how she defines herself.  She will often offer money she doesn’t have, open her doors to family members going through a rough spell, volunteer time, food, whatever is needed.  If I protest and say they are taking advantage of her, she just shrugs and says “Bahala Na,” like it doesn’t bother her.  I never thought that Mom kept tabs, or that even she had her limits.  But when those limits are finally crossed, she moves on. No tears, no drama.  Conscience clean.

Balikbayan Box, circa March 2009 and I must return my mother’s ashes to her family plot.  Five years have passed since she died, and I am compelled by her last wishes to make this final trip.  Now, I am the sole Balikbayan.  I pack clothes, purses, candy, ramen, and beauty items.  There are specific gifts for certain family members, my mother’s jewelry for my aunts, dad’s old watches for my uncles, money reserved only for my Dad’s remaining brothers and sisters.  I have no problem with looking stingy.  Handouts are expected, anticipated, and appreciated.  But that doesn’t mean I’m ready to comply.

It’s going to cost my dad $600 to file the paperwork needed to get her ashes buried overseas.  Frustrated, he declares, “We’ll just put her in the balikbayan box, goddammit!  Who’s gonna know?”  I put up the money.  She rides with me in my carry-on.

My plan was to leave my mother’s ashes here with nary a tear.  Not so much as a sob.  I carry such resentment for the neediness to which my mother catered throughout her life that I swear it might be what killed her. I can still hear her saying “I’m done with them,” and I want this trip to be final for me, too.  Bloody impossible, I now realize, because I see her everywhere.  I see her in the crumbling old buildings, in the swaying palms, in every rotten tooth that smiles at me, and every dark eye that stares. I see her in the wrinkles on my aunts’ faces, the dried fish in the market, the pot of dinuguan cooking over the fire, the dripping mango trees, and in every pothole on the street.  I am looking at her now, my eyes wet and swollen but raging with superhuman clarity, as I stare at the river where she used to swim.  In my hand is a small baggie of what remained after her burial, ready to make good on my promise to her.  My mother is everywhere here, and she has always been here, never really left, never really was the Balikbayan.  She has been here, throughout her life and presently in death, even though her ashes are now floating above the swirling rush of the river, all the way down to the sea, away from me.

Gwynn Gacosta has a B.A. in Political Science from UC Berkeley and an M.A. in English-Creative Writing from San Francisco State University. She works as a Special Education paraeducator for the Fairfield-Suisun Unified School District, as well as a tutor for Sylvan Learning Center’s after-school literacy program. She is the mother of two boys, and writes frequently about the Filipino-American experience. An earlier version of this story was read in conjunction with Asian American Women Artists Association’s “Eating Cultures” exhibit in May 2014.