The Vulture is a Patient Bird

One thousand hollow bones suspended
from one small island’s underbelly,
watery roots seeking anchorage,
ours its submerged landscape of crags,
broken into language and served with wooden spoons
half-toned with salt’s residue, sickled for the hoarding
of pre-dawn prayer, the lowering light of day,
the remains of night splattered onto paddy fields,
darkness packed beneath fingernails,
broken from sifting through cracks in parched soil,
every fissure a new stanza, a new border,
from where we come and to whom we belong,
this knowledge of god as place, confluence
of meanings and homecomings;
meanwhile, our bearing of witness,
our presence, our martyrs. We saw;
we saw, ya haqq, this scrabbling
through time’s departures, we saw,
our shahadah.

Voices carry poorly under the sea, granulating,
wires carrying roughly to me my mother
reminding me that today marks thirteen years ago
that we moved here, our first mooring
a dollhouse Mississauga hotel,
home for the singularity of one month,
its corridors loud with the noise of other
people’s luggage, and our first neighbours
Afghani and bustling, before we knew enough
to know what manner of stories subsequent years
would give us to share.

This is the week of voices feathering,
this is the week of days I count like prayer beads,
knuckle past twisted knuckle,
this the week whose map will mark the five days ago from yesterday
that you die in a Chicago hospital room,
resettled there by roommates
who found you and your pneumonia
communing in your bedroom.

These are the days whose skins hang loose,
gathering in pleats around my father’s eyes,
as you die Thursday and are buried Friday,
your two decades of backroom labour,
a silenced work acceptable to the nation,
pooling emptiness around the hospital bedposts,
your blankness of paper,
undocumented –
but for the phone bills that document
in reams how you called my parents
with more diligence than I.

This is time’s greyness, and its pixelation,
its harking to the thirty years ago that you
attended my parents’ wedding,
your presence a reminder of how the country remains a continent,
amalgam of absences, each heartbreak and each loneliness a nation,
each fear an army;
you arriving in my father’s birthplace as emissary
of the island’s so close too far aways,
other relatives too distant to note the redness of my mother’s sari,
too late to smooth out the stiffness of its folds, before its golden thread
unspools under my fingertips twenty odd years later;
you, uncle per the genealogy of friendship,
entitled to the conveyance of your news,
the aftermath dreaming of you the route
my father’s transnational return home takes,
so that when he calls his sister, his niece asks after
those linkages that death, striding across intervening
years and oceans, would appear fast to be dissolving:
Does this mean you are never coming to Sri Lanka?
Are you permanently settling there?
That unresolved question, the lifelong confusion
regarding there’s coordinates,
dogging my father’s every migration,
commencing at his first leave-taking
aged ten, half one hundred years ago,
from that small town, flanked by ocean dunes
and jungle thickness, blinding of light
spilling between my shoulder blades,
solar plexus of my histories.

Still that week, still that eternal week,
how it slices into words grown slack and shapeless:
people die in various ways here,
not always performances of the country’s war,
sometimes just endings come unto themselves,
shown by one relative that week,
his gentle passing marked with qurbani and khatam-al-quran
food for the living, prayers for the dead,
funeral of honour,
crashed by government soldiers,
who, camouflage-garbed, moonlight as event planners,
generous with suggestions for these proceedings.

They propose, cradling guns in lieu of tasbih,
that two mourners of their choosing – uncles,
per genealogies of age – march
through the town’s centre
(where the streets are wider, less green
than the paths that run past
the palm tree leaf fences
of my cousins’ homes,
more crowded),
sacrificial meat on their heads,
adornment of flesh,
a so gentle stroll to the police station.

Why? (The phone collects my mystification
in its mouthpiece, turns it tinny,
a mirror pivoting hope’s kneejerk on itself.)

A small story, and telescoped
by its backdrop: those other, those countless
humiliations of ranging scope,
all the ways that people can be removed from their homes and their skins,
the quietness of murder and the neatness of mass displacement,
this one part of the substance of the everyday,
how battlelines boast the patience of vultures,
how they root, headless, scornful,
in the soil, made muddy with blood,
yoked here by birth,
home before I knew the word.

ya rahim, heed this rollcall of those
who would seek your mercy:
women and men,
elderly and young,
present and absent,
the dead, the living.

It is summer when peace breaks out,
and we wait out four cut-eye years from its declaration,
each season sliding by the next, sticky
with incredulity: there were enough dead to make a nation,
an underground keeping of accounts,
enough absence to win any war. Now a confusion
regarding antonyms, our deployment of dictionaries – if that was war,
where are we are now, in which place
does peace reside, at which marked
or unmarked gravesite does its quiet keep vigil.

Something other than an experiment in deceleration,
more simply than a certain asphyxiation,
a desire greater than some uncertain respite from gunfire

(and the whiteness of unmarked vans,
the stubble of mines in grass’s weaving,
the communal nature of mass burials and
of Kattankudi’s saf*, shoulder to shoulder,
its prayer lines rendered by a body count,
a jummah that mourned its own worshippers,
the martyrs’ witness consecrated in east coast blood);

let it be something holier,
some architecture of relationhood,
a geography of the nation’s undertow,
a genealogy that unnames the civilian,

a hailing: peace to the deceased,
strength to the bereaved,
inna lillahi.

*On Friday, August 3, 1990, Liberation Tamil Tigers of Eelam cadres raided four mosques in Kattankudi, killing approximately 150 men and boys while they were performing their evening prayers.

Fathima Cader’s writing has appeared or is forthcoming in Now Toronto, Briarpatch Magazine, and the Windsor Yearbook of Access to Justice, among other publications. She has appeared on Al Jazeerah and on The Agenda.  This fall, she commences teaching at the Faculty of Law at the University of Windsor. She tweets at @ficader. 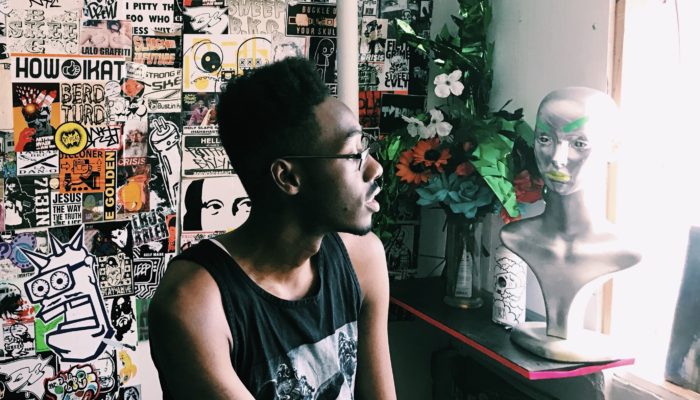 Interviews
“Promoting love in the wake of violence is a revolutionary act”
Poetry by Tara Stringfellow
An Interview with Apogee Journal Issue 7 Contributor, JP Howard