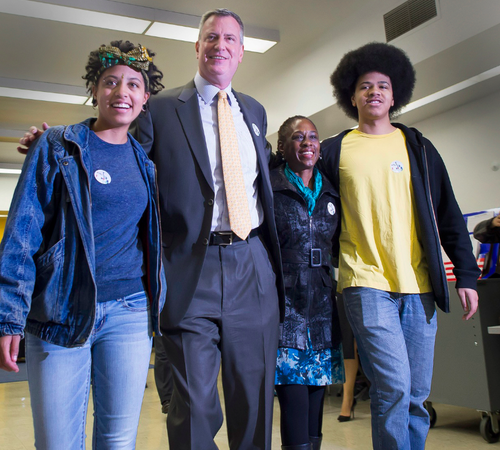 I’d just like to say a few unfiltered words about what I see when I see Bill de Blasio with his family.  When I see Bill de Blasio with his wife, I see a man who followed his heart, who loved and did exactly what he wanted to do, relationship-wise, despite knowing that they would encounter hostility, despite knowing that if he wanted a big political future, the direct mail pictures would not look like all of the other ones.  Yet, the irony is that it’s this very picture, in 2013, that I know brings so many to tears, makes people say yes, this is how we should be fearless enough to be—loving who we want to love, and being proud to do so.  And then being man and woman enough to stay together, and raise such beautiful, impressive children…

The politics of identity are not enough—they are important, for sure—but his unwavering stance against stop and frisk, and his unwavering stance that everyone in NYC counts, not just the superrich—well, that’s what I think won this election for him.  But you can’t overstate what you learn about the man by watching him with his family.  He’s walking the walk.  You can’t photoshop it.  He’s doing it.