Ten Seconds in the California Sun: The Murder of Andy Lopez Cruz 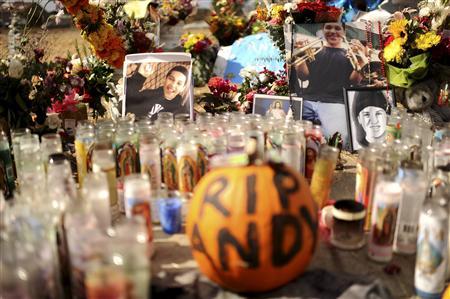 Each person blinks once every two to ten seconds, that’s as many as five times in ten seconds, or, in a moment of extreme anxiety, pupils dilated, he or she will unblinkingly stare, pop-eyed with fear. The heart beats sixty to one hundred times per minute, but in ten seconds of panic the heart can hammer twenty-five times, maybe faster. Psychologists say that in one tenth of one second after seeing another person’s face you make a decision about whether or not they are trustworthy. Of course, the officers never saw his face before they opened fire; they saw a figure with a gun, a big gun. Businessmen say that you have seven seconds to convince your audience that you are “the man” or you have no deal. Here is the deal: the cops saw a figure with a gun in a brown neighborhood and they opened fire. The figure was a thirteen year old boy: Andy Lopez Cruz; the gun was plastic.

The human brain can think fast—acceleration into action, deceleration into calm—somewhere in those ten seconds, two cops pulled over, opened the car door, yelled, “put down the gun,” and then fired seven rounds. Count ten seconds.

The headlines read “consequences of toy guns,” though I beg to differ. The ten seconds that resulted in the death of Andy Lopez Cruz were the consequence of real guns, not toy guns: real guns wielded by purportedly trained men and women. Police execution; ten seconds in the California sun.

I left the Bay Area to move to New York City in August 2010. For a year and a half before that, my friends and I  kept record of the individuals killed by the police in Northern California, evidence of the publicly funded assassinations of black and brown people that was, and is, happening all around us. The first entry was New Years Day, 2009: Oscar Grant, unarmed, was shot in the back by officer Johannes Mehserle.

July 14th, Verna Lisa Hollins, a gunshot victim, was left with no medical attention while the San Jose police “secured the crime scene,” she was dead by the time the paramedics came half an hour later.

July 17th, Fred Collins was shot to death in a hail of bullets fired by Oakland and BART Police just blocks away from where Oscar Grant’s murder took place.

And then last week, three years and three months later (how many have I have missed? Who is keeping track?) I made another entry: October 22nd, 2013, 13 year- old Andy Lopez Cruz was walking to his friend’s house to return a toy gun when he was shot seven times by two police officers with real guns, Santa Rosa, CA.