Gioncarlo Valentine, A Life in Twos 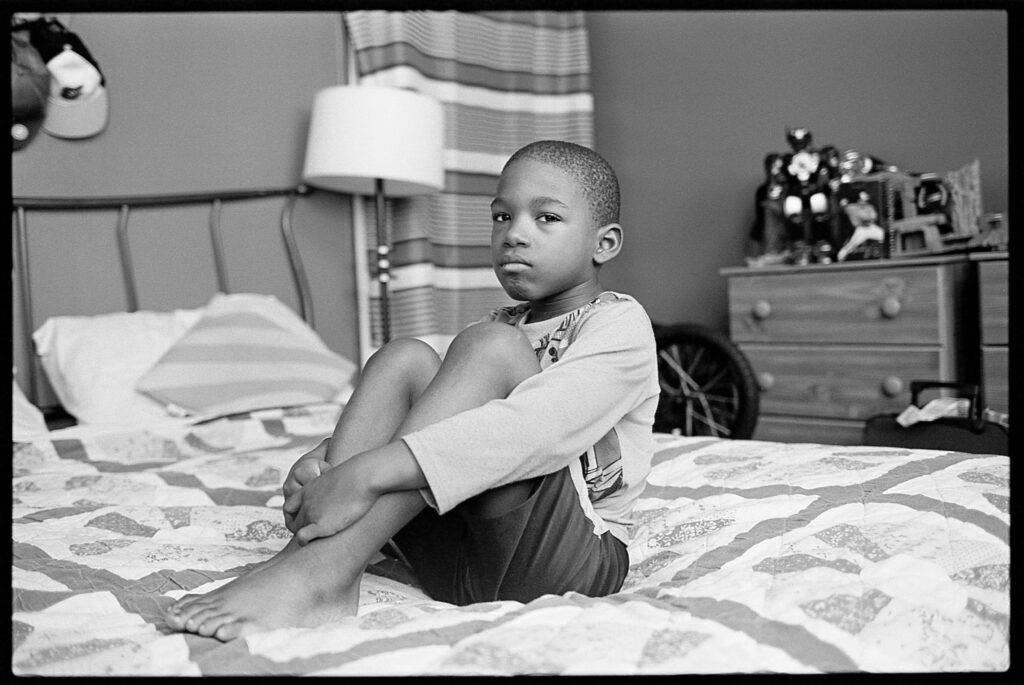 Your earliest memory is from when you are two years old, when you saw your father beating your mother. You remember very few details about the night, but you remember admiring your mother’s beauty, even then—she wore a red leather two-piece; she had the silkiest ponytail that you’d ever seen. You hear your father screaming at her and your mother screaming in defense. You see him push your mother’s leather laced body against the wall, and then slam her head into it. She drops her ID on the ground, and you are comforted by the smile in her picture, almost forgetting the violence in the background. When she screams, an unfamiliar, yet inevitable, feeling begins inside of you. It’s a mixture of regret that you can’t help her; fear that you’ll lose her to the grip of something or someone; and disbelief that a person would ever hurt someone as beautiful and fragile as your mommy. This emotional mélange will scar you this night, and follow you for the rest of your life. Please be ready for it.
‏‏‎ ‎‏‏‎ ‎‏‏‎ ‎‏‏‎ ‎‏‏‎ ‎‏‏‎ ‎‏‏‎ ‎‏‏‎ ‎‏‏‎ ‎‏‏‎‏‏‎ ‎‏‏‎ ‎‏‏‎ ‎‏‏‎ ‎‏‏‎ ‎‏‏‎ ‎‎Two years later, you are sexually assaulted by your father. You couldn’t quite call it rape. He kisses your lips and body inappropriately when you are alone together. He rubs places he is not supposed to rub and puts his tongue places on your four-year-old body. You will carry the guilt. Luckily, the shame and self-loathing will become so numbing, so early, you will forget the incident altogether and move on entirely. Well, not really. You will develop sexual feelings for older men with pretty eyes and, maybe in some part of your subconscious mind, your father. You’ll feel connected to things that are taboo, for years, until you finally unlock your truth—twenty years later. You don’t tell your mother. You fear her guilt would come to surpass your own.

By the time you turn twelve, you have been homeless on the streets of Baltimore for two years and are failing the sixth grade for the first time. Your father has finally stopped beating you, your brother Tywone, and your beautiful mother in all her ponytailed glory. Your mother’s drug and alcohol use has grown so rampant that she has taken to sex work in order to feed you as well as her habit. It is another cross for you to bear. Although the trauma from your first dalliance with homelessness will live beneath your ribs for the rest of your life, you prefer it to living with your father. Your body finally starts to heal from the physical bruises he inflicted, but your emotional bruises are just beginning to take shape. This is the year your family gets a house, at last; you fall in love with it.
‏‏‎ ‎‏‏‎ ‎‏‏‎ ‎‏‏‎ ‎‏‏‎ ‎‏‏‎ ‎‏‏‎ ‎‏‏‎ ‎‏‏‎ ‎‏‏‎‏‏‎ ‎‏‏‎ ‎‏‏‎ ‎‏‏‎ ‎‏‏‎ ‎‏‏‎ ‎‎Your brother’s room boasts pictures of Three Six Mafia, the continuous smell of weed smoke, and a two-foot iguana named Rocky. Your mother’s room is classy and minimal. Ivory paint, glass bedside tables, and the smell of lavender pushing into the air. Your room becomes a shrine. Your twin bed sits upon eight discarded milk crates. You tape photos of Aaliyah to your walls and honor her memory with a swift punch to anybody who bad mouths her. You listen to “Rock the Boat” two hundred times a day and hear rumors of an Aaliyah compilation album at the end of the year. On December 10, a beautiful album is released for her, with all new pictures you’ve never seen, but the joy surrounding the album doesn’t suffocate the grief you feel from her loss. Sadly, your grief is just beginning.

Twelve months later, you get evicted for the first time. Your mother has been late on the rent, and her addictions have been gripping her throat like Daddy used to. One morning the police surround your house, and your mother comes into your room whispering. You can see the fear as she perspires, huddled in the corner. You all assume that these are truancy officers because you haven’t been to school in weeks and are failing the sixth grade for the second time. Instead, they are the sheriffs coming to evict you from your “Section 8 property.” They yell through the door. Your mother opens it slowly. They tell her that she has to go to court right away to try to get an extension—the eviction is scheduled for 1 p.m. They warn her that if the judge declines the extension, they will begin evicting us without hesitation.
‏‏‎ ‎‏‏‎ ‎‏‏‎ ‎‏‏‎ ‎‏‏‎ ‎‏‏‎ ‎‏‏‎ ‎‏‏‎ ‎‏‏‎ ‎‏‏‎‏‏‎ ‎‏‏‎ ‎‏‏‎ ‎‏‏‎ ‎‏‏‎ ‎‏‏‎ ‎‎Mommy tells Tywone to take the baby somewhere else, afraid that CPS will get involved. And she tells you to start packing as much as you can. You tell her you can’t pack the whole house. She squats down, places her hands on your cheeks, looks into your eyes, and says, “Please try.” You see her eyes welling up, and you nod like a good boy. You scramble through the house, trying to pack your things. You start by packing your Aaliyah posters, then Tywone’s room. You’re trying to find boxes and bags to put everything in.
‏‏‎ ‎‏‏‎ ‎‏‏‎ ‎‏‏‎ ‎‏‏‎ ‎‏‏‎ ‎‏‏‎ ‎‏‏‎ ‎‏‏‎ ‎‏‏‎‏‏‎ ‎‏‏‎ ‎‏‏‎ ‎‏‏‎ ‎‏‏‎ ‎‏‏‎ ‎‎Your family has been declined. You hear banging on the door and see all of the neighborhood crackheads pushing their way in. You go outside in your oversized shirt, Parisian silk head scarf, and bare feet to watch as the neighborhood kids circle. They make a crowd directly across the street from you, and you wonder if they are truant too. You feel like a spotlight is on you, center stage with all your insecurities, loneliness, and shame illuminated. You are being evicted. As a group of men from the neighborhood enter your home they begin taking your life a part. You wonder where your mommy is. As all of your precious things start to line the grass in front of your house, you are torn between leaving it all in search of help or staying to protect it. The crowd of fellow neighborhood truants grows louder. You hear them making fun of your scarf, so you take it off, only to remember that you have some kind of mushy afro braid situation below, which they proceed to mock. The men hired to evict you are not being gentle. As your furniture starts to roll down the hill you hear the kids yelling, “Ahhh haaaa” and “We taking your shit.” You panic and run to a neighbor’s house, a neighbor who you’ve never seen and will never see again. Your mother doesn’t have a phone so you call your grandmother, she is in no position to help you. When you leave their house, your mother arrives with a truck. You are not alone anymore, but you are homeless again.

In 2012, you are twenty-two. You are about a hundred and twenty pounds heavier than you were at twelve, and suffering from crippling depression. You are regularly engaging in unsafe sexual practices with strangers. You sexualize the risk. You don’t care about your body; you just need to feel. The subconscious things you have suppressed about your father and your interaction in the alley have manifested themselves in the dank, lonely spaces of your mind. You are in college, living on your own, and you just lost your job. You have been trying for weeks to find new employment in order to pay the late rent. All of your friends are broke, and you are about to face eviction. You haven’t spoken to your mother in a year. You stopped talking to Aniah, your best friend from high school, a straight boy who you’ve been in love with since the ninth grade. He is written on every breath you take, so your heart breaks every time you breathe in. He can’t possibly reciprocate your love, and you fear you have lost him for good. You are worried that you won’t find the money to save your apartment, that you’ll lose what you worked for two years to keep. You are worried that you will fail this semester due to the stress. All your worries come true.
‏‏‎ ‎‏‏‎ ‎‏‏‎ ‎‏‏‎ ‎‏‏‎ ‎‏‏‎ ‎‏‏‎ ‎‏‏‎ ‎‏‏‎ ‎‏‏‎‏‏‎ ‎‏‏‎ ‎‏‏‎ ‎‏‏‎ ‎‏‏‎ ‎‏‏‎ ‎‎You move in with your grandmother after you get evicted, reopening the familiar wounds of displacement. Terry, a childhood friend with whom you’ve reconnected, drives you and your things across town and helps you schlep them up three hundred stairs. You feel like you’ve hit rock bottom. You get an email: the college has cut off your financial aid and you are on suspension. You appeal.
‏‏‎ ‎‏‏‎ ‎‏‏‎ ‎‏‏‎ ‎‏‏‎ ‎‏‏‎ ‎‏‏‎ ‎‏‏‎ ‎‏‏‎ ‎‏‏‎‏‏‎ ‎‏‏‎ ‎‏‏‎ ‎‏‏‎ ‎‏‏‎ ‎‏‏‎ ‎‎People’s kindnesses extend as far as they feel it should, not as far as you need it to. Your grandmother starts allowing your mother to visit the house, and you leave every time she comes. If you would just go talk to her, maybe fall into her arms, she might help save you from the heartache you feel. But you are steadfast in your commitment to stubbornness. You avoid her like the plague, until you can’t. One day, as you toil away in your grief, locked away in your temporary bedroom, you hear the familiar fragility in your mother’s voice ringing through the house. She knows you’re there but respects your wishes to not talk to her. You hear her crying to your grandmother, “What did I do?” and “I miss my baby.”

In 2015, you are still here. Suicide couldn’t kill you, twenty-two didn’t end you, and loss could not defeat you. You are living in New York City, where you’ve dreamed of living all of your life. It’s not as great as you thought, but you have improved immeasurably. You are angry and narrow-minded because of your newfound Black Nationalist ideals. You often feel lonely, but want to give the city and your dreams all you have. You go back to Baltimore every chance you get, and find solace in your solid friendships—you and Aniah are in a difficult place because he’s joined the military and is far away, but you’re still best friends. Everyone is proud of you, except you. You are still working on loving yourself and seeing yourself as worthy of love. You still have so much growing up to do, but you’re trying.
‏‏‎ ‎‏‏‎ ‎‏‏‎ ‎‏‏‎ ‎‏‏‎ ‎‏‏‎ ‎‏‏‎ ‎‏‏‎ ‎‏‏‎ ‎‏‏‎‏‏‎ ‎‏‏‎ ‎‏‏‎ ‎‏‏‎ ‎‏‏‎ ‎‏‏‎ ‎‎You spend a month in Hawaii; get eight of your photographs placed on billboards; get accepted into Parsons; complete your first photo series; and start working on a book of essays. You are more powerful than you’ve ever been. Your talent is growing and fostering your creativity. You are building a stronger relationship with your family, with a healthier perspective: You don’t blame or resent your mother—you love her now more than ever. You are learning to meet her where she is and deal with her alcoholism. She’s been clean from drugs for a few years, but still drinks her Steel Reserve. Although you still deal with depression, you are working hard to be kinder to yourself. You are still desperate to feel love, but you are more focused on reaching your dreams.

I know you are battling with yourself a lot these days, but I want you to take a moment to breathe in your accomplishments. You have lost so much, but you have gained so much more. Although you are not religious, you feel the grace, support, and spirit of Kirby, Aaliyah, and Duane. You know that they are with you, they forgive you, and they love you.