Our apartment waits on the third floor like an uphill cemetery
Mami needs to walk up to rest her bodies. She lives among the dying
and she is—grieving. The elevator stops working so that she must
walk upstairs drunk in grief. Before this, she leaves
our dead to celebrate her sister’s life. Titi is 52 now—30 years older
than her son was when he died. She carries coffins in her chest,
the coffin keeps growing. Mami returns home to grieve
—to her youngest daughter. She’s a monster only
tequila can make. She wails remembering their mother.
The coffin she carries cannot be closed or left home. Grief
unbearable like an open casket. She buries herself
next to her mother alive. Her daughter undresses
her. She retches roses on their casket. Her daughter bathes
her. Her daughter is 19. She wails, wet with grief she won’t
remember in the morning Mami, perdóname.

Ritual washing often occurs when beloveds, or funeral directors, wash and dress a deceased person. It is often seen as an act towards purification.

Here, ritual washing occurs too for a grieving person being eaten alive and washed still. 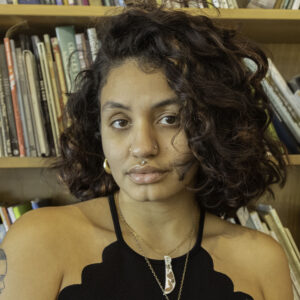 Gisselle Yepes is a 23-year-old Puerto Rican and Colombian storyteller from the Bronx. They are currently an MFA candidate in poetry at Indiana University, where they have received the Bertolt Clever Poetry Prize and the Guy Lemmon Award in Public Writing. Gisselle’s “Not an Ode to April 22, 2019” won Missouri Review’s 2021 Poem of the Year. Their work has also appeared in Gulf Coast, The Academy of American Poets, and voicemail poems. Gisselle holds a B.A. from Wesleyan University, where they earned the Winchester Fellowship, the Sophie and Anne Reed Prize, and the award for Connecticut Poetry Laureate. They are an alumnus of the Tin House Writers Workshop and the Juniper Summer Writing Institute.