are always full of advice—look on the bright side,
do yoga, snap out of it.  I’m supposed to put
my feet in the wet grass, touch the sponge
of the earth underneath me—that’s what
my beloved suggests after I have wasted myself
on the pain of the unknown. Enough with distractions,
enough watching Temptation Island reruns, creating
scenarios where I am the jealous woman watching
her lover take body shots off some busty blonde.
I’m really just sad about death. All the deaths
this season makes and remakes. So I put
my feet in the damn grass, get them as wet
and grassy as I possibly can, stomp them into the dirt
like a child playing in the mud. If I’m going
to take his advice, I’m going to go all out. If being
cured were as easy as putting my feet in the grass,
fuck, cover me in a spring’s worth of clippings.
Aren’t I supposed to try to love it again,
the spring? Each spring, another Jesus to resurrect,
each spring another rotten egg. I thought
I was supposed to leave all my bodies
buried. But I look for them, my fingers
deep in the mud now, scraping the ground
with what stubs of nails I have left.

IN THE COUNTRY WHERE MY PARENTS MET IN A TAXICAB

I was almost named after the woman
who put out a cigarette with her red high heel—
it’s the carnival scene, John Travolta on his knees,
worshiping her black spandex pants and red-belted waist.
It was the first movie my mother watched in America.
She didn’t speak English. I didn’t

eat the beans from the school cafeteria.
They were never served with rice, just
a hotdog. But I learned
that an A in spelling equaled coupons
for free cheesy breadsticks at Domino’s.
And I learned that hair
wasn’t supposed to smell like fried pork chops
when the white kids formed a line
to whiff my braids.

When my cousin and I played American,
she’d grunt and move her tongue,
make weird sounds. I’d pretend
not to know English. Then we’d buy
too many things with Monopoly money,
stuff them into plastic bags.

When Grease came on TV,
my mother would hum the songs—
You’re the one that I want, Oo-oo-oo honey.
My lips to the screen, I’d breathe
a name into the fog, the smoke
crushed under a foot. 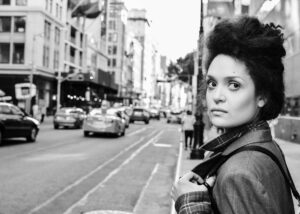 Diannely Antigua is a Dominican American poet and educator, born and raised in Massachusetts. Her debut collection Ugly Music (YesYes Books, 2019) was the winner of the Pamet River Prize and a 2020 Whiting Award. She received her BA in English from the University of Massachusetts Lowell where she won the Jack Kerouac Creative Writing Scholarship; and received her MFA at NYU where she was awarded a Global Research Initiative Fellowship to Florence, Italy. She is the recipient of additional fellowships from CantoMundo, Community of Writers, Fine Arts Work Center Summer Program, and was a finalist for the 2021 Ruth Lilly and Dorothy Sargent Rosenberg Poetry Fellowship. Her work has been nominated for the Pushcart Prize and chosen for the Best of the Net Anthology. Her poems can be found in Poem-a-Day, Poetry Magazine, The American Poetry Review, Washington Square Review, The Adroit Journal, and elsewhere. She resides in Portsmouth, NH, where she is the Poet Laureate.