Je suis tres fatigué my mother would say, and
fermé la bouche.  She taught me the art of not sleeping,
passing my open bedroom door at midnight,
book in one hand, and a steaming mug of tea.
I used a flashlight and fiction to keep my eyes
propped open against the natural desire to go dark.

My father napped on the couch, the sound
of his coughing rumbling through the air
as familiar as birdsong, a man with limitless
passion for a world of justice, and
a deep well of resignation for himself.

I don’t think I began to be tired
until my uncle stuck many parts of himself
between my four year old legs.
There’s a photograph of me in the park,
after. I can tell by my dark child eyes,
wary, wounded, watchful,
too tired for my age.
Je suis tres fatigué.  Fermé la bouche.
Or the other way around.

My mouth a thin line, a zipper
behind which crouched men
loaded up with threat. I carried
a continent of the silence
they beat into me with their dagger looks.
It weighed a lot. I was
an exhausted seven year old.

The summer I was nine I could no longer walk up the hill at the summer camp my grandmother paid for me to go to just like my white Jewish cousins. I got out of breath. I didn’t have asthma. I didn’t have a lung problem. I was just incredibly exhausted from being so afraid all the time and the effort it took to hide it because when the men said if I showed in word or deed what they were doing to me they would murder my family, I believed them.  So I learned to play recorder and etch designs into copper and ride a horse in circles in a barn, but I stopped walking up hills.

I don’t really understand rest.
I know distraction. I know
refusing to read the avalanche of emails,
I know not wanting to do anything,
but I only remember this: 1974
the summer I was twenty
making up a biology incomplete
by learning sea turtles,
one afternoon in a hammock
strung between the veranda posts
of the old lighthouse
I watched the blue flower of the sky
keep opening and opening
and my cluttered attic of a mind
went empty, swept clean.
I think that may have been rest.

I plummet into sleep
afraid not of the depths
but of the twilight.
I keep myself awake
until I know I can fall swiftly off the edge
rush past the old broken fangs
of a crouching menace decades gone
into the blue trench
into the waters of Olokun, the darkness
of her indigo worlds. Could that
be rest?

I imagine writing one hundred
poems about fatigue.
I imagine shedding them the way
eucalyptus trees shed strips of bark
long ribbons that curl and fall
not in flecks of dust like human skin
but in rusty lengths
that become soil.

There should be more words for tired.
Years ago I was in rehab for one of a dozen
bad blows to the head because of epilepsy
and the man I was hauling around at the time
compared the shattered wiring of my brain
my inability to initiate the action I had chosen
to his own habit of putting things off
and the therapist said no, because
if I gave you fifty dollars to do a thing on your list
you could and she can’t. There should be
a stronger word for can’t.

People who are not crushed with fatigue
think we should be able to push through.
That when we say we’re tired, those of us who are
crushed, we mean what they mean
after an ordinarily tiring day.
There should be a word
for a weariness that coats everything with dust.
There should be a word for
all the blood in my body draining out
through the soles of my feet, and
no oxygen going to the muscles it would take
to stand up.

There should  be a word
for trying to do your lover’s homework,
pulling double shifts
trying to bank emotional labor
in someone else’s leaky account
which is not how it works, ever,
how exhausting it is to keep
pouring your heart down a hole
trying to believe it will this time
because the men with knives
made you forget how to walk away.

When I say I’m too tired, people don’t believe me.
They don’t understand the shorthand.
That I am demolished by the wrecking ball of silence.
That I am trying to shed the bark of it.

The men said don’t move, so I don’t.
Now people tell me to exercise. They
tell me how good it will be for me,
and maybe it’s true, and maybe it’s not, because
post-exertional malaise,
but when I think of moving,
I remember centuries of stone,
an ocean bed of sedimentary rock,
pushing down on me, pinning me,
those men, those empires
until I think I am only
a fossil of motion
trapped in rock.

Get up and move, they say.
Just do it. 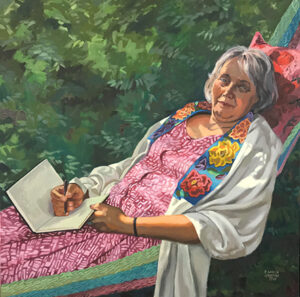 Aurora Levins Morales is an Ashkenazi Boricua essayist, cuir, disabled and chronically ill feminist poet and fiction writer who work has been widely anthologized and translated. She is the author of seven books, most recently Silt: Prose Poems (2019), Medicine Stories: Essays for Radicals (2019) and Kindling: Writings on the Body,(2014) with two more on the way. Her work bridges the most intimately personal and the global, body and planet, systemic cruelties writ large and small, transformation, recovery, imagination and hope.  She blogs and is financially held by community at https://www.patreon.com/auroralevinsmorales