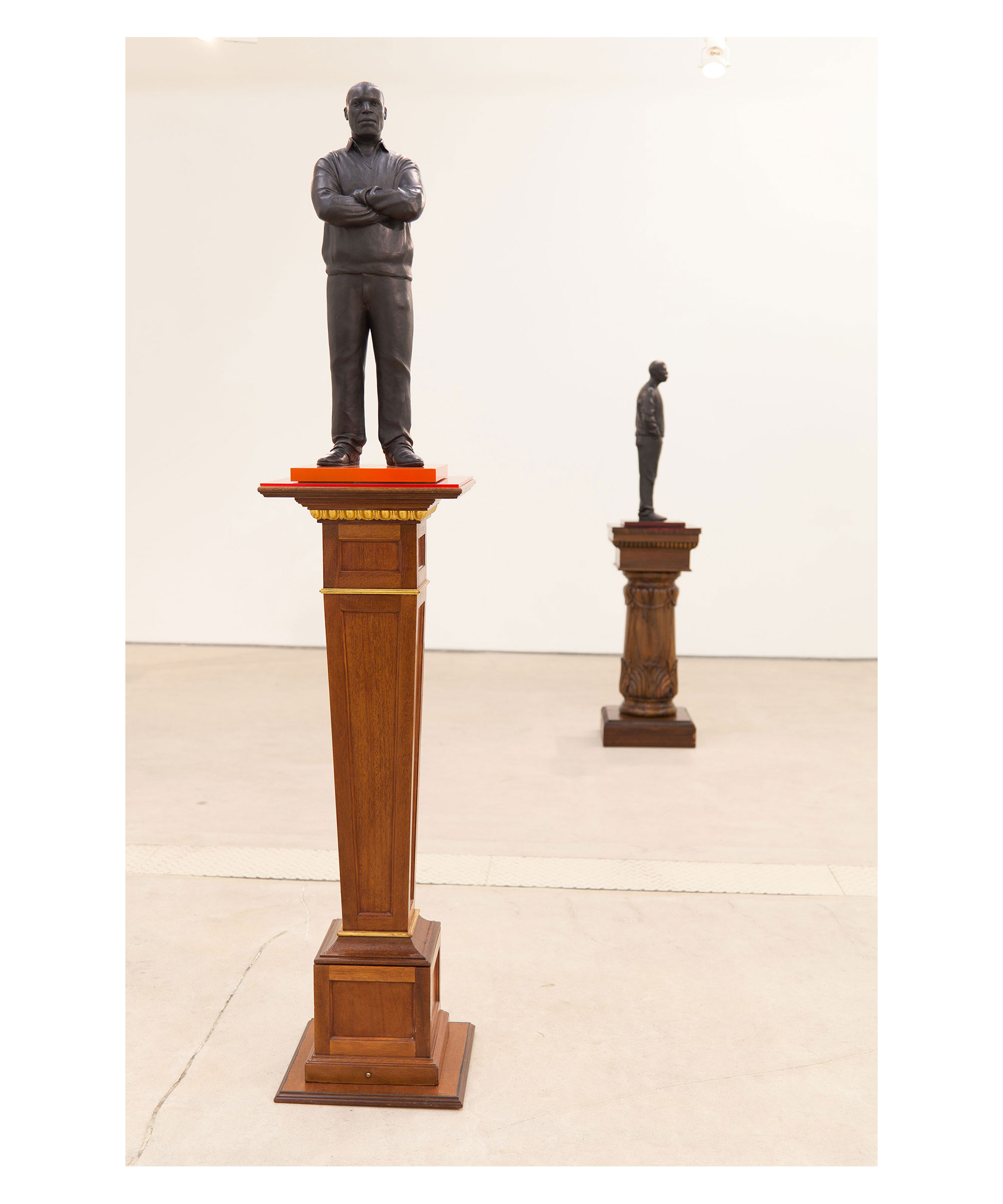 He doesn’t think the gun is loaded when he pulls the trigger. He doesn’t think of the bullets, standard issue, that he loaded into the chamber earlier that late autumn day. Instead he recalls the last days of spring siphoned into bootcamp at the army’s Oakland base, those final days before boarding the USS John Pope, when he first learned of his assignment to a logistics team in Saigon. An office job. He considered himself lucky then. His C.O. said they don’t put college boys in the infantry. Slapped him hard with the assurance: “You shouldn’t ever have to fire.”

They put the gun in his hand,

the uniform on his back,

put his Black body in the water.

His first time at sea.

What follows: the calcifying mathematics of war. Twenty-nine days to reach Vietnam, followed by two months split into uneven intervals of wading and drifting through monsoon season, from port to port, while the barracks are constructed. One month and ten days of bathing in the rain. Two more months for the musky stench to fully leave. Only a day or two for the smell of bodies in various stages of decay to take its place.

He no longer culls memories from the soldiers’ talk of home, no longer feels the urge to crowd around the radio for its warbled offerings of the familiar. Because it’s never really the same. His everyday still feels uncertain. Everything is new. Even the fear.

He recognizes life here is not so different from life over there, reminds himself this isn’t the first time he has lived with the threat of death. He thinks back to the segregated streets of Memphis, of colored fountains and Nathan Bedford Park.

He hunts for sustenance in the meager pleasures of life on base and his infrequent trips into the city, hungering less and less for the land that sent him here. Saigon bustles like Memphis, like Chicago, like a city that isn’t under siege. The crowds, the buses, the pollution, the pulsing city almost makes him forget there are forbidden zones, places off limits to someone like him. But there is awe and respect afforded to US soldiers who stroll the Saigon streets. The daytime brings limited freedom in the city and on the base.

He grows accustomed to the discipline guiding his days and structuring his life. Although nighttime is punctuated by curfews and piercing mortar wails flanked by uneasy silences, he grows accustomed to this rhythm, too. He ascends higher in the ranks, from a Private E1 to a Corporal E4. One of a few Blacks in his troop now giving orders. He finds pride in this, in finding a new role that fits. He’s Black, yes. But now he’s a fighter, a soldier. He doesn’t exist under fire. He attributes his ascension to learning the rules early. The rules in Vietnam are the rules in Memphis. This war is another fight he has come to accept. A battle to stay alive.

He studies the white soldiers and their easy confidence, how they move with abandon around the city, amassing throughout Saigon. He watches as they mock the Vietnamese, taunt the women who run the G.I. cafés. He counts the liberties they take, the times the C.O.’s look the other way as G.I.’s plump their speech with “nigger” and “gook.” As if they mean the same thing. As if different slurs signify the same enemy. As if either is an enemy. He keeps his eye on the redhead, a cocky G.I. known as Ohio. Ohio calls him monkey and spook every chance he gets. He watches and waits, unsure of what he’ll do.

When he pulls the trigger he remembers that he doesn’t have to fire, but he can. He raises his weapon, squaring off at the nape, the G.I.’s red head lolling backwards and sideways as he sleeps. At the last second he tilts the pistol skyward. A moment later large chunks of plaster and straw cascade around him. Now his only thoughts are of the footsteps thundering toward the barracks. He feels his hand curled tightly around the stock. He musters the control he could not locate a few seconds ago and glances up, peering past the emptied chamber of his 9mm through the hole in the thatched roof and into the night. Ohio blinks widely at him, his mouth open as he lies silent among the rubble.

There are moments when the sequence of events remain clear, in which the smell of the rice paddies, the sharpened edges of grain, the clouded eyes of the children who work in the fields all press into him. Moments when he recalls the weighted steel against his side and the clicking sound it makes as the rifle meets the zipper on his pants, how it marks the slow rhythm of his steps while he patrols the base. Other times, it’s unclear what came first. Was it the screams anticipating the crash? Or was it the jet spiraling into a nearby field, scattering limbs, then shrieks, in every possible direction? It’s in moments like these (for there are more) that he understands how memory works—the careful selection of details, the keen focus on the pieces you want to keep, the blurring of those you don’t.

Here, there isn’t space for flickering too far backward or forward, for convincing himself that any other life would have been possible, or that any other life is really imaginable. He remembers to forget, deciding instead to thread swatches into a seamless fabrication. Redaction is a necessity. He cuts and pastes, substitutes one memory for another. Rice wine for blood, laughter for screams and silence.

A year passes, and he learns he’s headed home. Only then does he allow himself quick dreams of a place so far away it seems imaginary. He loosens the grip on his control, beginning to make room for the return of that familiar longing. His ears brim with American music as he reintroduces himself to Motown. At last, he listens for news of something other than supply shipments. He imagines the celebration awaiting him on the night of his return. He grows fuller with thoughts of his mother’s cooking, his father’s laughter and backyard barbecues. The humidity is no longer jungle heavy; it’s the cool wafting off the Mississippi River and into the Memphis spring air. He remembers all that he loved, all that was his and was known. He imagines feeling welcome in a city, in a country that didn’t want him before. With growing certainty he anticipates acceptance, an American embrace.

How could he prepare for the hero’s unwelcome that would greet him? How could he know that just two days before his return, the King’s blood would pool under the balcony of the Lorraine Motel? That under the evening sun blinking orange the blood would flow into the streets, from Mulberry to Main? That the riots would begin almost instantly? How could he know those same streets he’d so longed to see would be emptied of everything, save military vehicles, that the same tanks he left would find him here?

Once again there is silence. The smell of gunpowder and iron reminds him of death’s constant presence. Once again there is curfew, the Tennessee National Guard lining each block of the city. Sounds he longs to forget come raging back. He hears the howling whistle of nighttime mortars. He hears, “Nigger, get out of the street!”

Stay in line. Watch your back.

He has children who will never know of war. This is his determination. He learns to call this place home, and carves a life in the shape of it, furnished by the anger he refuses to name and an unyielding allegiance to order. The children follow instructions. We stay in line, until we don’t. He makes sure to course correct whenever possible. He watches our backs with stern devotion. It is a love best understood as duty. He yearns for the respect he never received and understands acquiescence as its precursor. He mistakes our fear for awe.

While we are still young, he learns of the chemicals running rampant through his body, a spray saturating the entirety of his life. He receives a diagnosis, then confirmation that there are more to come. The anger finally takes a name—an agent called orange, permeating his blood and disintegrating his control.

In the years that follow, the grief, fear, rage, and the illness all metastasize. He has surgery to remove the tumor. But soon, his wife decides to remove herself, her pains not so easily resolved. Those of us left are physically present but emotionally absent. Every member of the household conspiring to escape, hoping to survive.

Only with separation do they each begin to grasp what has passed, and what has been passed down.

The dis-ease of inheritance.

His body holds dualities, shrinking and expanding, bearing pride and loss in equal measure. Pains run phantom and real down the length of his aging body, shooting aches, like punctuations to his every movement. His children have grown and launched themselves out into the world, opting for a love built on distance. They call and visit when they can, each basking in their successes, large and small. Each party settles into an uneasy rhythm, sharing only what makes the other comfortable. But at least, he reasons, they are good and they are healthy. This is his constant refrain. Life for him now is lived in reverse, cycling back into step with the steady threat of death and the constancy of loss. It’s only his fear that’s gone.

A growing list of ailments and medications pull at the seam of his resolve: a stroke that leaves him bedridden for weeks, a diabetic coma that nearly takes his life, high blood pressure and cholesterol, kidney disease, blood clots. His incontinence, wrapped in diapers. He goes for chemotherapy injections for his second bout of prostate cancer. A decade prior was the stroke that left him bedridden for weeks. Each ache, each injection of insulin into papery thin flesh, each drop of his blood dripping orange reminds him that he survives. For that, he knows he is a hero.

The health he once considered priceless is now quantified at $4,000 of monthly restitution. One set of wartime calculations is substituted for another to determine the government’s culpability, just how much Agent Orange exposure there was, how much his pain is worth. They compensate him at 10% a limb for numbness, 30% for diabetes, 60% for the cancer. He knows it’s not perfect. He would rather have his health. But he’s made his peace and accepted his lot. Remembering, always, to forget. He considers himself lucky. He reminds himself often that it could have been worse. He is not a casualty.

He is not a victim.

He is not a victim.

Victims do not survive. And he is still here, not there, still alive. He focuses on the familiar, on order, propriety, and above all his sense of duty. He remembers how memory works, shaping his into a linear narrative of a soldier, of a hero, finally getting his due. The ship, the smells, all of the blood running orange through his body and through the streets have faded, making room for thoughts more easily processed. He volunteers at the VA Hospital and sees other vets missing limbs, homes, and families. In the support groups, they talk. They all express their pride for having served and for having made it back alive. In those moments he gains and regains peace, clarity. This is simply the way it is. This is how it feels when your country loves you back.