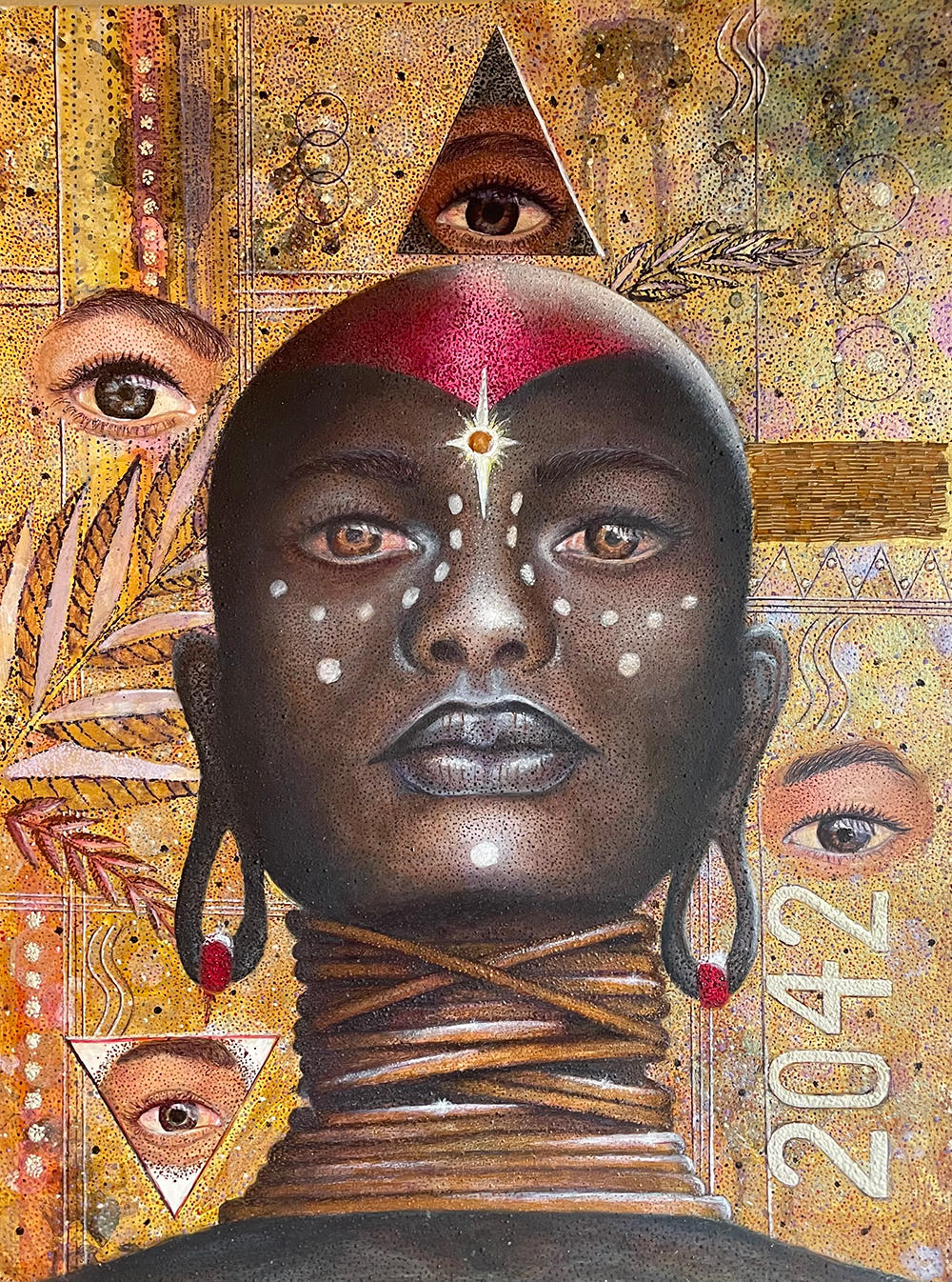 Floating along the waves of Clear Lake on this fishing boat feels like a meditative massage to my weary soul and body. Looking at Kam, my 16-year-old grandson, relaxing next to me, I can’t help but smile. I watch him swallow from a glass bottle of IBC cream soda. I know he chose that drink for its recyclable glass container just as much as its taste. His grandfather, who was also an activist, drank the same soda.

I can see my husband in Kam. Same long lean body, same curly fro tapered on the sides and an almond complexion with light brown eyes. More than that, he shares his grandfather’s mannerisms—the concerned smile, holding his head high, and cocking his ears when he doesn’t understand something. When he speaks, it’s like hearing an echo sounding across generations.

Harnesses hold our fishing poles but my mind focuses elsewhere, far beyond catching trout. COVID-19 and 40 days straight of protests over the police murdering George Floyd remind me how every inch of progress towards equality has marred my skin. Flashbacks of traumatic memories flooded my mind as I watched George drown under blue cotton–Klan members bombing 10-year-old Black girls, seven stitches behind my left ear from a cop’s baton, and my co-leader getting murdered all without justice being served. This short trip is a chance to have the conversation with Kam before his plan to protect at the state capitol causes keloids or ends his life too.

Just as I am considering how to begin, Kam speaks. “Grams, do you think we’re making a difference? I mean, I got the majority of my school to cut class to protest in front of the Oakland Police Department for reforms, but when we march on the state capitol next week, should we ask for more reforms?”

“March on the state capitol for reforms? Hell, the body camera reforms were supposed to stop the murders. Don’t risk your life begging for changes that won’t do anything. Listen, one thing I’ve learned from 50 years as a civil rights attorney is that reforms won’t change a culture that emboldened detectives to stick a billy club up a man’s rectum or murder a man in broad day on film. You simply can’t reform policing between their blue wall of silence and powerful ‘you can’t fire me’ unions with millions in self-perpetuating lobby money,” I tell him while removing my shades and peering right into Kam’s eyes.

Kam’s right eye twitches as he searches my face, looking for clues to understand why I see gloom where he sees the future promised to MLK happening right now.

“But with the right reforms, we can fire all the bad cops.”

“See, the police didn’t arrest the slave masters, they captured or killed the runaway slaves,” I say, my voice rising as I continue. “They didn’t arrest the authors of the Black Codes, they arrested the freed Black men that wouldn’t sign unjust labor contracts. They didn’t arrest the factory owners, they arrested or killed the strikers and union organizers. They didn’t arrest the racist Klan members, they assaulted and arrested non-violent Black protesters trying to vote. Even Dr. Martin Luther King. They didn’t arrest rich white folks sniffing cocaine, they declared war on poor Black folks smoking crack. They don’t arrest corrupt senators holding gun show loopholes open or racist Whites flooding the hood with guns from out-a-state, they give Black 17-year-olds an extra 25 years for using a firearm during a crime. In other words, even flooding the system with good people just means their bosses’ orders will be followed more humanely—we’ll get lynched in court with life sentences instead of on the street.”

“This time is different. We have the whole world marching with us, and we aren’t gonna stop until we achieve equality.” I can hear his desperation to convince me, as if my acquiescence will make change come.

“Kam, look, we have to rethink the whole concept of policing. We have to invest in preventing crime by addressing its root causes, and stop investing in policing to solve crime with more harm on top of harm.”

“Grandson, be mindful. Defund the police is adversarial language that works against us, lumping in bad elements with cops just trying to do their jobs.”

“Sliding us ain’t their job, Grams.”

“But when we scream for the arrest of individual cops, we leave that system in place and continue the toxic ‘us against them’ atmosphere.”

Overhead, I notice a flock of geese flying against the noon sun, and remember the goose bleeding out on the grassy yard, legs up in the air, victim of a stray bullet. Right next to the bird were two unarmed men dressed in California prison blues. Each wore Afros and had beautiful dark skin leaking blood. Murdered from a guard tower perched on a 50 foot wall.

I took the stand as a witness against the White correction officer who fired the shots and it cost me flat tires, busted out windows, and much more that can never be replaced.

“White supremacists aren’t gonna concede their power. They’ll kill us all first—that’s why they militarized their policing in the first place. Policing needs to be replaced with a new type of entity—one that focuses on mental health wellness, restorative justice, drug treatment, conflict resolution, job training and referrals. You know, a force of community programs that seek to repair our society, not seek further destruction of Black people. We’ve already had 400 traumatic years of that, which has us on self-destruction autopilot.”

Kam sits quietly for a minute, a yank on his fishing line ignored, as he absorbs my fears disguised as wisdom.

“Nah, Grams,” Kam argues. “They can’t slide us with the world watching. We are overcoming right now.”

“Kam, hear me, sweet grandson. I’ve survived KKK bombings, police attack dogs, batons, and false charges. I’ve marched till my feet swelled. We’re still getting murdered. I don’t mean to crush your hope, but you can’t expect the crooks who took America by barbarity then tricked the world into believing everyone else are the ‘savages’ to ever hand over equality.”

Kam quotes MLK: “‘The moral arc of the universe is long but it bends towards justice.’ I’m telling you, Grams, it’s justice time.”

“Baby, you’re not hearing me. Yes, we may take huge leaps towards justice, but we can’t reach it, because when we win the fight for equality, they’re going to pull out their AR-15s and mass murder us.”

“I’m telling you, they can’t kill us without hitting a whole bunch of White allies. This is our time.”

I sigh, proud of his faith, but wishing my generation had fought harder so Kam wouldn’t have to bear this burden. I can’t lose Kam—my family has paid in too much blood already. Let someone else take the lead this time—someone else’s loved one.

“History repeats itself. They always kill our leaders.”

“I remember when King put hundreds of kids, some as young as six, on the front lines of a Birmingham protest, facing off against Sheriff Bull Connor. I was one of those kids. The strategy was that the sheriff wouldn’t hurt children. But it didn’t work. Connor arrested 600 kids. He sicced dogs on us and hit us with batons. That’s how I ended up with the scar behind my ear. This time we can’t jeopardize our youth, our future. This time it’s for folks who have seen their best years long ago to do all the marching and protesting. Not my grandson.”

“This here is like a generational relay race, and it’s time for me to take the baton and run the next leg.”

“Damn it, Kam—stop being so eager to die!” I yell, shocked by the ugliness in my own voice.

Kam cocks his head to the side as he responds, “You’re a legendary civil rights attorney—how can you expect me to give up when the momentum is finally on our side?”

“I’m your grandmother first. I helped change your diapers, and the last thing I want is to cause your murder like I did your grandfather’s.”

Kam’s eyes widen. He looks as shocked as I feel that I blurted it out. Now that I have, I have to tell him everything.

“He was only 25 when the police railroaded him for his Black Panther activities—work I helped him with. Your grandfather told me about what was going on at his prison. So I toured there with a human rights organization seeking to do something about all the lethal force being used against our brothers. That’s when I witnessed it for myself. A White correctional officer shot two unarmed Blacks in the yard. I testified against that officer, and a week later another white guard gunned down your grandfather. He was 27-years-old. I never remarried because no man could ever replace Kenzo nor should another die over me. Besides losing the love of my life, I lost close friends and his family members, who blamed me for his death. My soul can’t bear no more, so don’t be hell-bent on breaking the last few pieces of my heart.” My eyes sting as I hold back the tears welling up.

Kam’s face softens as he says, “I didn’t know that. All the history book said was that Grandpa was a Black Panther killed in a prison riot. Why didn’t you tell me?”

“I can’t talk about it without reliving the feeling that I caused his death. My activism caused it.”

“I feel you, Grams. But I’m doing this so the sacrifices you and Grandpa made aren’t in vain.”

I put my Ray-Bans back on to hide the tears starting to leak out. Am I a coward for not wanting to sacrifice anymore to the cause?

“Think about Fred Hampton! He united gangs of different races for political action. He and the Black Panthers were addressing the root causes of crime. Chicago would be much different today if the FBI didn’t have Chicago PD murder him. Remember, you can’t move toward anywhere dead.”

“If nothing changes, I could end up dead anyway—murdered for selling cigarettes,” Kam says, his voice cracking as it rises. “I’d rather risk death fighting for change than die because nothing has changed.”

I pause as his point hits the mark. I’m still scared for him, but also proud of the person he’s becoming. I never meant for the baby who ran around my basement in diapers to turn into this young man following my footsteps. I should have known—he was so curious growing up. At six years old, he would sit cross-legged beside my La-Z-Boy chair asking questions as I read Du Bois, Baldwin, and Hughes. Over the years, as my Afro turned from black to salt-and-pepper to full silver, he kept coming back to my house, his Afro bigger every year, asking me to read, listening to me recite passages of history books as if they were Octavia Butler novels.

I pray my shades block Kam from seeing my resistance breaking down.

“Please, please just promise me that when you lead that protest at the Capitol, you will keep it nonviolent.”

As the sun dips towards the horizon, Kam leans over, kisses me on the cheek, and says, “I promise. Now let me reel in this fish—just like you taught me.”

“The artist called this painting an omen to the new reality that America is beginning to live up to. It is a multicultural, diverse society. This comes with a warning to all racists that they will be welcomed into this new society or ‘you can collide with it but will not stop it.’ And a message to the new American Patriots: ‘It is your inherent duty to protect humanity from its flawed racial past as the new Atlantis.’ The Compton California native stated that he started painting and doing art as a conversation with his parents and that in all of his paintings there are messages for them.”