poems know no sound to keep alive
under seven million down
wakeful nights: i wonder: why eternal
no. black holes
and the bodies they swallow

ricochet limp. rip apart. a mass—
the heaviest burden to say
i cry again and again and not hurt

Note: a dull ache at the temples, a shortness of breath, a series of historical texts cited to furrow a shelter.

People assimilate all the time while speaking: 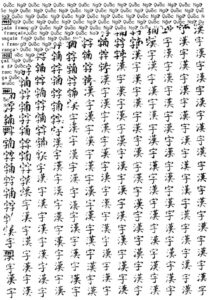 Now heavy stresses. How a single word can land leaden as a man’s palm pressed against my chest, pinning me to the couch. And to explain why this or that hurts, I must in measured tones, in a timely manner, convey enormous amounts of information—such as history, the origins of a term or people, or the use of pummel on my family. Curious why this burden tends to fall heavy on some and not others, I turn to a linguistics study on Vietnamese prosody.

In Vietnamese, different questions can yield the same answer:

I learn that Kim Phúc is always running away from the bomb. I learn that heavy stress singles out the syllable or syllables that carry the heaviest burden of conveying information. [ii]  I learn I need at least a syllable, or a page, or a people of words to calm me, to share the weight-bearing load and not stutter-stop, searching for the right kind word.

to heave a detonation. how many tons begging this. might we, lying still on baseboards, smelling of salt and brine, a million stars hitherto, remain in the land rather than exiled. enraged. to hide among peripheries, the end: the chase on our backs: the closest thing: fire lungs and broken feet broken hands broken teeth

.
and the bombs burst in air
and the whole sky lit up
and the crowd went oooh

.
it was. your body
what time is?
down

.
to pay
to purge
to prove
(the same beat over and over)

.
to enemy
to state
to save
(over and over)

Honey, I can’t hear you—

Honey, you’re going to have to speak up—

Honey, what are you trying to say?

with my good arm
i deadlift
my head
heavy laden lead
upon lead.

there. a jar.
let it roll
off the seat
to the floor.

I need a proper outlet
equal and opposite, the body
expunged of its tonnage.

harbored, undetonated
in our kitchens and children
and sleep.

a rush | a force | beyond recognition | pseudonym for | the world | raging against | the land |
rich in nutrients | sweaty with waiting | awaiting, thick | humidity | a presence | a pressure |
on the balm | balmy rains | toppled buildings | and dustfall | collapse | my lungs send | a force |
wind steals | the breath | a chokehold | a boat’s hold | the throat |

[i] A timeline of writing systems in Việt Nam under French and Chinese colonial rule, from 939 to 1945. Romanized script elides with Chinese characters, which fill the majority of the page to denote the millennia of Sinicization. In the upper left, the repetition of “Quốc ngữ” refers to the writing system first introduced by Portuguese missionaries in the mid-17th century and later modified by French missionary Alexandre de Rhodes. Initially used only by Vietnamese Christian communities, the writing system was made mandatory the French colonial government in 1910 and is now the official written form of Vietnamese. This image was originally published in Colonialism and Language Policy in Viet Nam by John DeFrancis (Mouton Publishers, 1977, page x).