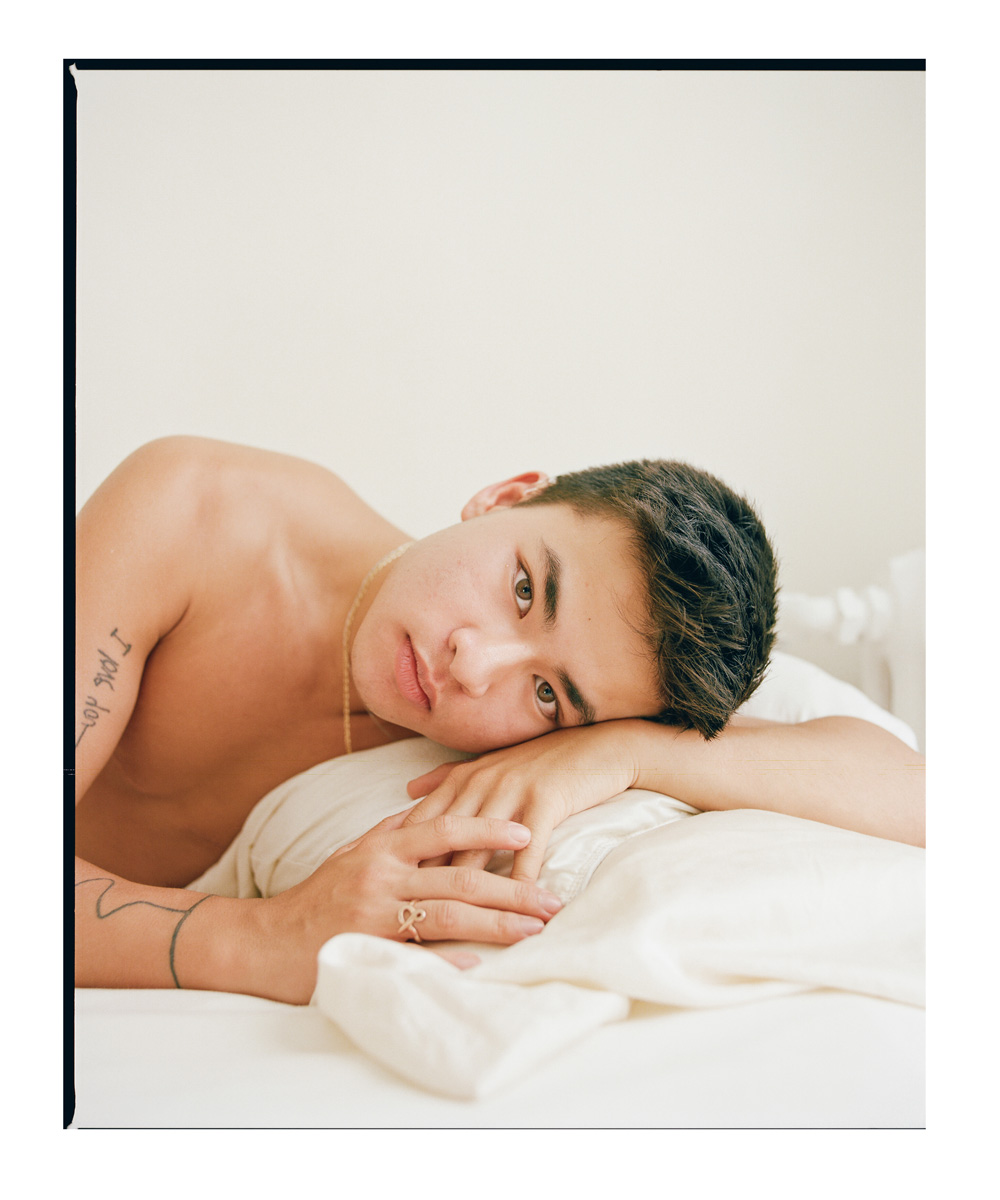 As if to say that I can know it all. My bones are liquid with ghosts at sea. As if to say to mourn is to re-memory. Before one remembers, one forgets. Recalling you has been nothing but a re-death.

Let’s continue with a beginning: a water molecule forms when two hydrogen atoms covalently bond with one oxygen atom as both hydrogens settle on the same end of oxygen looking something like this:

Here and there and wherever water exists, the shape of these bonds are like our fingers entangled in the rapture of us only tethered to and separated by the same oxygen we breathe and must also live in between us or else there is no bond to hold it all together because in being held we learned how to hold and holding is no trifling matter.

\Because/ the opposite of water (is not fire: water is an entity, fire is an event. The right amount of water extinguishes fire because it eliminates heat quicker than fire produces it. Unless it is an electrical fire because water conducts electricity and isn’t that funny how water can carry the spark and kill it, too?

The opposite of water) is a drought.

Skin cells die every two to three weeks, and if you touched me again, my body would lose you in a month, but if it wanted to memorize you, what next? A tingle, a tinge. No, a pinch. Yes, in resurrecting the dead, the present is a mend between past and future, but aren’t stitches a kind of re-injury and therefore a revision? My chest ached one evening last winter, sharp pangs from a break up. My friend asked where. I said “cardio chambers, at the front.” She said “chakra sutures, that’s what those are.”

My favorite way to sharpen a blade is with a whetstone wet with water. It is essential that the whetstone is wet with water because if it is not wet enough, the blade will never get whet. In fact it will ding.

On our first weekend, I sliced your tongue and to no surprise you liked it. I’m certain your saliva still lives somewhere inside of me, made a ditch into a stream a stream into a rapid a rapid into swords and given the chance, I’d slice you again.

That Tuesday before The Thursday you sent me a song by Hiatus Kaiyote that made me dance like a star in a parking lot at midnight. I don’t even know how to pirouette but I flew flying to “The Lung.”

and the waves know/ the ocean knows/ the river holds/ what the sea will unfold/ Toni Morrison said, “All water has perfect memory and is trying to get back to where it was. Writers are like that. Like water, I remember where I was before I was straightened out.” But I can’t remember where I was before I was bent but I try like Angela Bofill and hold my laptop like a keytar because what am I making but syntactic waves and synths.

When our mouths first touched, I slid inside your leather jacket and felt the softness of your shirt on my palms while the warmth of your jacket heated my knuckles. Our teeth confronted each other but it wasn’t a sign of poor talent. It was a sign of need. I pulled you in.

You pulled me in, too.

I re-read “Criticism is Not Static” by my friend, Jessica Lynne, which is making me consider revision as the location of (our) intimacy. If we take her words and replace them with another, what then are our thoughts on these haptics? “A [touch] that—like a river—carries forth the record of their grace. [Tenderness] that dares. [Contact] that seeks accountability. Where does such [intimacy] live, and how is it sustained in a moment of extreme economic precarity for those who call themselves [lovers]?”

Even as rivers flow, they bend through soft soil moving with time and grounded suggestion. So now, the curves of your lips suggest what cannot be said. I adored them together. And I desire them apart.